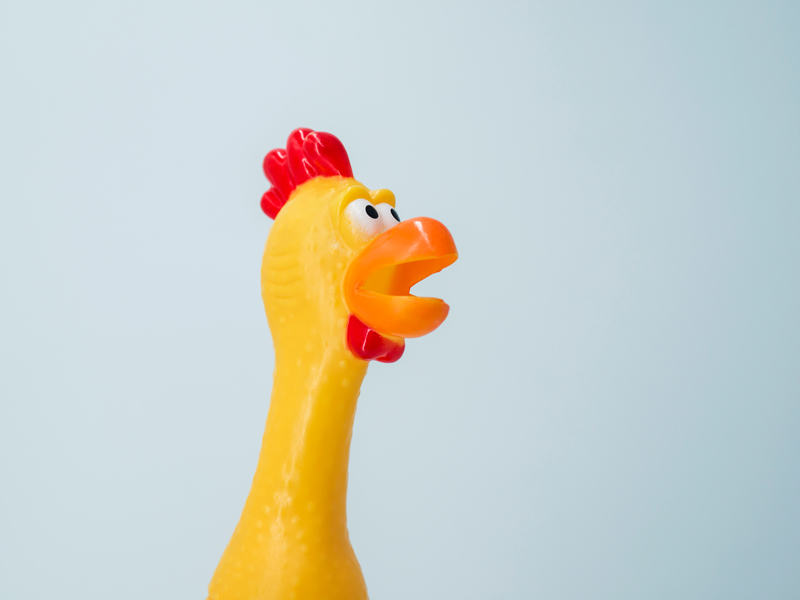 In search of a rubber chicken

As creative as online worship can get these days, there’s sadly no digital substitute for the clinking, clanking sound of coins in a metal pail.

Or the squawk of the occasional chicken.

Such has been one of the unique challenges facing the Rev. Galen Smith, pastor of Westminster Presbyterian Church in Worthington, Minnesota, during the COVID-19 pandemic in his effort to keep the congregation’s “noisy offerings” going in continued support of the Presbyterian Giving Catalog.

Smith described Westminster’s “noisy offering” as the time in worship following the children’s moment on the fourth or last Sunday of the month when the church’s young people would carry metal pails up and down the aisles inviting members of the congregation to donate whatever loose change they had in their pockets. Afterwards the money collected would be directed to a local or national mission project.

A couple of years ago, Smith said the Mission Committee decided to designate eight of the church’s 12 noisy offerings to support only one project for the entire year, with the remaining four benefiting the PC(USA) Special Offerings, of which Westminster receives all four: One Great Hour of Sharing, Pentecost, Peace & Global Witness, and Christmas Joy.

“One of the reasons for this was to provide a bigger bang,” said Smith. “In our conversation, we were talking about what we were using our money for, what mission projects we were involved with, and what we wanted to do with the portions of the Special Offerings that stay in our congregation. It was then that I suggested we look at the PC(USA)’s own Presbyterian Giving Catalog. After everyone looked at me strangely, I went right over to the church’s front entrance, grabbed several copies of the catalog and handed them out. When one member spotted the ‘family of chickens,’ that’s what we decided.”

Now in its seventh, record-breaking year, the Presbyterian Giving Catalog — which is available both in print and online — is filled with a wide variety of gifts that provide real and positive impact around the world, including aid for refugees, access to clean water and ways to end hunger.

One reason why the catalog in general and the chickens in particular were so appealing to the congregation was what Smith called “the visual aspect.” “We wanted something that the people could see,” he said, “and say, ‘We did this.’”

Another key factor in choosing this catalog item was its cost, which made the family of chickens achievable for the 200-member congregation.

“Some of the projects require quite large amounts,” said Smith. “For the chicks, at a cost of only $25, we thought we could show that to people, and tell them that we gave two or three or five this month or over the last three months, or whatever.”

Although the Mission Committee had intended to display the project’s progress visually in the context of worship, those plans have been derailed due to the pandemic. To date, Westminster’s efforts have resulted in the congregation being able to donate a total of nine families of chickens.

“Our original intention was to have a chart showing the number of families of chickens that we purchased, and then to be able to show that number growing larger and larger throughout the course of the year,” Smith said. “We had minutes for mission all planned out to show where the money is going and explain the whole thing to everybody. Now I think about the pails just sitting there in the church and nobody with them on Sunday mornings. It’s too bad I don’t have a rubber chicken that I could sit in front of the cans. One of our goals is to get that kind of stuff going once we can get back and gather in worship again.”

The whole idea behind the noisy offering, Smith said, is that “it’s supposed to be fun for the kids and the congregation.”

“I love watching the kids,” said Smith, himself a father of two young adult children. “I love it when they’re about four or five years old and they don’t know what to do. Usually one of the older kids is assigned to walk with them, and they hold the pail out there, see somebody throw the coins in and get a great big grin on their face. I remember one kid who made a beeline for where her grandpa was sitting. You knew she wanted that money from grandpa, and she got it!”

Smith said that once in a while somebody will come into the church during the week with a bag of coins and say it’s for the noisy offering.

“But we don’t have the clinking and clanking that we normally have,” he said. “With all the technology out there, maybe we could figure out a way to get that clinking, clanking sound into our online worship. It’s a fun challenge to have.”

This was published for Presbyterian News Service on February 9, 2021.