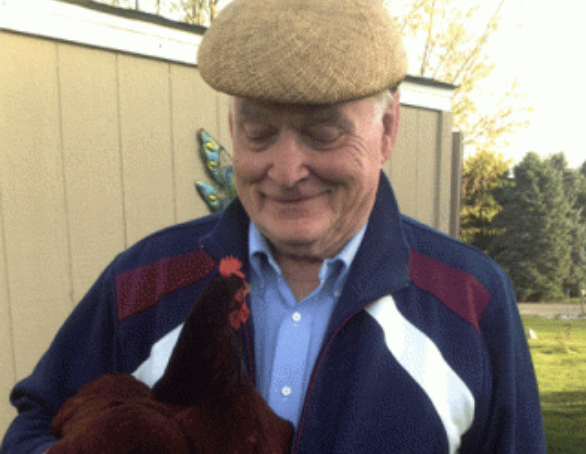 While it’s not just any pastor who can effectively attend to more than one flock at a time, in more than 60 years of ordained ministry, the Rev. Rex E. Wentzel always managed to look after at least two “flocks” at once.

On Dec. 6, the humble, humorous, mission-minded and generous pastor — known in his later years as the “Chicken Man” for his love of giving primarily gifts of chickens through the Presbyterian Giving Catalog — finished his earthly race.

Quite fittingly, Wentzel, who was also a prolific poet, “penned” this chicken-themed verse about a race of a different kind:

Olympic runners put on quite a show;When they race they really go,But not as fast, you should know,As my chickens chasing crumbs I throw.

According to the Dec. 8 obituary published in the Madison (South Dakota) Daily Leader, Rex E. Wentzel — who was committed to “supporting disadvantaged peoples in developing countries through the gift of livestock, particularly chickens” — was born on September 26, 1934, in Hartford, Wisconsin. After graduating from Pittsburgh Theological Seminary in 1959, Wentzel was ordained to the ministry of Word and Sacrament by the Presbytery of Milwaukee. During his long and distinguished career as a writer and parish pastor, he served a total of seven churches in midwestern states, including Iowa, Indiana, Pennsylvania, South Dakota and Wisconsin. After retiring and relocating to Sioux City, Iowa, Wentzel remained active in the Presbytery of Prospect Hill until his death.

The Presbyterian Giving Catalog, which Wentzel’s family cited in the obituary as one of his favorite mission causes, is filled with a wide variety of gifts that provide real and positive impact around the world, including agricultural tools and training, livestock, aid kits, access to clean water and helping to end hunger.

In an article published by the Presbyterian News Service (PNS) on Dec. 1, 2016, PNS Editor Gregg Brekke described Wentzel’s first encounter with chickens and later with the Giving Catalog.

Having moved into a new home in 2016 where the previous owners had chickens and a coop, Wentzel declined their offer to leave the chickens — never having been around the web-footed creatures — but he did keep the coop.

“My daughter, who lives across the street from me, went and bought some chicks in April. Now I have four chickens and two ducks,” Wentzel told Brekke in 2016 about what had first piqued his interest in raising chickens and the event that fostered a change in what he asks of congregations to give toward mission. “I didn’t even know how often they laid eggs. But in early August, they started laying eggs.”

“I had the Giving Catalog around and one day I happened to see you could send chickens,” he told Brekke. “I thought, hey, I’m having fun with chickens, I’ll send some and make a contribution. The next time I preached I told them, ‘Don’t pay anything to me, send it for chickens.’ And people have been nice to do that and it’s a fun thing to talk about.”

Inspired by the Giving Catalog’s mission of empowerment, Wentzel had set a lifetime goal of raising funds for 100 flocks of chickens that provide vital food and nourishment to families via the eggs they produce. It was a goal that he — and his flocks — easily surpassed years ago.

“Because Rex was one of the Giving Catalog’s biggest advocates, who also made gifts personally, I’m not sure the Giving Catalog will ever be able to replace his efforts,” said Teresa Mader, the PC(USA)’s project manager for Direct Response. “Even though he never stopped giving families of chickens, it always amazed me that he felt that he had never given enough. There’s no way we’d ever be able to calculate the number of individuals and communities he has impacted. I feel confident there is a flock of hens surrounding and watching over him now.”

Wentzel had always hoped that his example would inspire congregations to be more active in using the Giving Catalog and understanding its use in mission. In some congregations where he had preached, individuals donated chickens in addition to the amount sent as an honorarium.

Because the family has requested that memorials be directed to the charities with which Wentzel was involved, his witness through the Presbyterian Giving Catalog will continue.

“I believe that the Rev. Rex E. Wentzel made a tremendous difference in this world,” said the Rev. Chris H. Roseland, acting senior director for the PC(USA)’s Mission Engagement and Support. “His communities became better places because of his efforts. Rex leaves a void in our hearts and lives, and he will surely be missed. I believe that when his time had come, the Good Shepherd came to him, threw his loving arms around him, and said, ‘Well done, my good and faithful servant.’”

According to the obituary, Wentzel is survived by his brothers Jay Wentzel of Arizona and Jon Wentzel of Wisconsin; his three children, Rex Bradley Wentzel (Dianne), Rebecca Spadafora, and Kimberly Strom (Jeff); his nine grandchildren, Conrad, Sofia, Derek, Luca, Ugo, Carson, Harrison, Olivia and Sam; his four great-grandchildren, Kailani, Jacque, Everly and Braxton; and niece and nephews Kelly, Greg and Jeff. He was preceded in death by his parents, his wife Carol, his sister-in-law Kathy and nephews Mark and Dan.

A memorial service was held on Dec. 12 at the First Presbyterian Church of South Sioux City, Nebraska.

This was published for Presbyterian News Service on December 15, 2022.