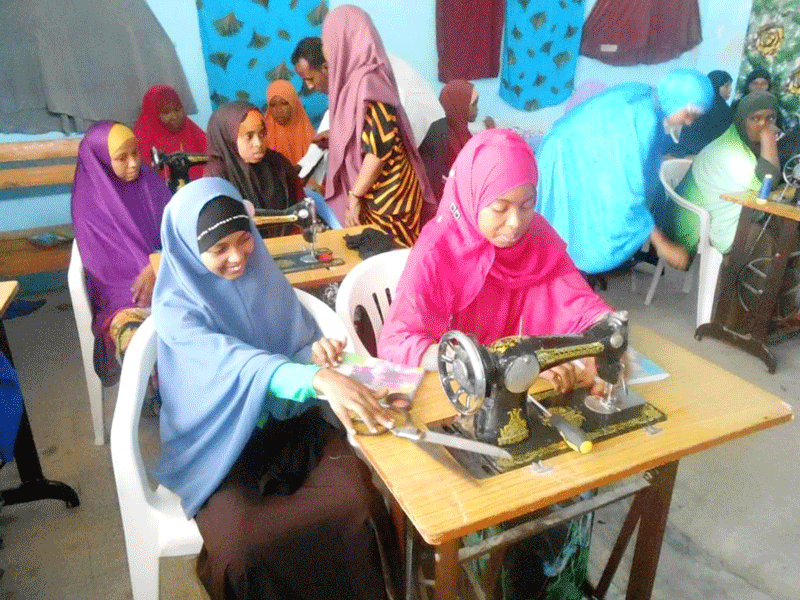 For every step forward that has been taken toward closing the global gender gap, there have been at least two steps back.

And then some — largely due to COVID-19.

“Unfortunately, the gains women and girls have made in the last several decades are being eroded due to the pandemic,” said Sue Rheem, the PC(USA) Representative to the UN. “More women and girls are being pushed into poverty as a result of COVID-19.”

At least one congregation, Westminster Presbyterian Church in Lincoln, Nebraska, not only took note of the ever-widening disparity during the ongoing pandemic, but members of the church also took swift, generous and compassionate action on behalf of women and girls.

On Sunday, September 12, Westminster’s head of staff, the Rev. Chris Peters, revealed that the church was being challenged with a surprise “reverse offering.” On that morning, each household received an envelope containing $50 in cash along with the encouragement to use it “to love your neighbor” by supporting persons in need or an organization that provides direct aid. Peters announced that the entirety of the reverse offering’s funds came from the congregation’s unexpected 2020 budget surplus, which he attributed to church members’ sustained giving even through months of distance due to COVID-19.

With envelope in hand, ruling elder Linda Burchard immediately turned to the Presbyterian Giving Catalog, which has long been her go-to resource for alternative Christmas gifts for her extended family. 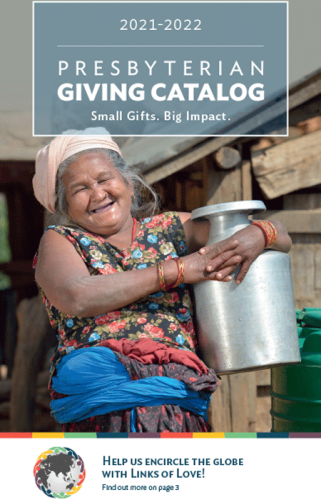 Now in its eighth, record-breaking year, the Presbyterian Giving Catalog — which is available both in print and online, in English, Spanish and Korean — is filled with a wide variety of gifts that provide real and positive impact around the world, including aid for refugees, access to clean water and the help to end hunger.

Several weeks earlier, Burchard, who currently serves on Westminster’s Church Life Ministry Committee, recalled having seen a story in the local newspaper about a religious organization that was training girls and women in Africa to become self-sustaining by making clothing.

“In that moment, I realized that I often support the needs of women and children through the PC(USA)’s Giving Catalog and Presbyterian Women,” said Burchard. “When I went online and discovered that I could fund a sewing machine for $50, it seemed to me a perfect way to empower and support women with my reverse offering.”

Burchard’s gift was not only life-affirming, but it was also timely as the world prepares to observe the International Day of the Girl on Oct. 11.

The U.N. General Assembly acted in December 2011 to recognize Oct. 11, 2012, as the inaugural day of the International Day of the Girl (Child), which, at that time, was specifically centered on the grave issue of child marriages. Today the observance is intended to bring attention more broadly to the challenges girls face, and to promote girls’ empowerment and the fulfilment of their human rights.

Among the many ways the Giving Catalog supports the goals of the U.N. observance are such gift options as health for mothers and newborns, land tenure training and protection, teacher training, women’s empowerment project, jerry cans and latrines, the latter allowing girls worldwide to remain in school.

“When I heard of Linda’s gift to support women and girls through our Presbyterian Giving Catalog,” said Peters, “I told her I couldn’t think of a better way to use her offering! At Westminster, we often name the importance of working for the flourishing of all people as part of our call as Christians. As we approach International Day of the Girl 2021, I am grateful for the many ways Westminster-Lincoln’s members are directly supporting the flourishing of women and girls, through our reverse offering and on their own.” 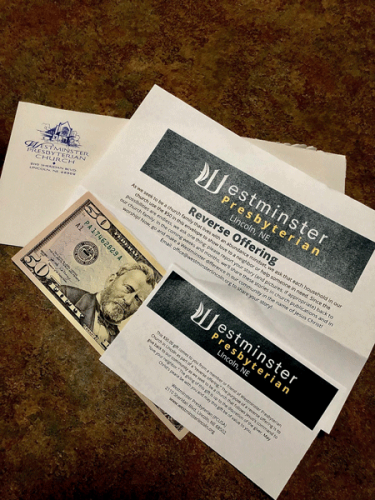 Many worshipers at Westminster Presbyterian Church in Lincoln, Nebraska, were surprised to learn on the morning of Sept. 12 they’d be participating in a reverse offering. (Photo by Cathy Hershberger)

Peters said that other reverse offering gifts have been used to benefit such local non-profits as Friendship Home, an organization that provides crisis support and housing to women who are victims of domestic violence and their children.

“The reverse offering has afforded members a wonderful opportunity to practice what we are called to do in the Bible,” added Burchard. “It is exciting to hear where our members have chosen to give their money.”

“The generous support we receive from Presbyterians through the Giving Catalog goes a long way to improving the standard and quality of life for thousands of women and girls around the world,” said Valéry Nodem, associate for International Hunger Concerns with PHP. “Whether they and their families are displaced by conflict and seek protection, whether they need individual family toilets that protect them from disease or violence, or whether they simply need the reassurance that through equitable access to land, their families will be able to produce enough food to meet their food needs and enable them to continue their education, women and girls occupy a prominent place in our work.”

“It is vital that women have access to, use of, and control of land,” said Schuhmann. “Less than 15% of global landowners are women and 40% of countries limit women’s property rights. Often, women and their children are evicted from their lands when the male head of household dies. Secure rights to land translate into better and more sustainable land management, and a protection of natural resources. And not only are women’s land rights correlated with the health and sustainability of the land, but land ownership is also often a prerequisite for decision making potential in communities.”

Schuhmann gave the example of one PHP partner, Action for Rural Women’s Empowerment (ARUWE), a women-led organization in Uganda that has been working to promote the rights of women to land and property in the Kyankwanzi district. She said that ARUWE has made it its mission to educate women on their rights to land under the law and has assisted them in accessing land services and securing land registration.

“We continue to dedicate our efforts to promoting equitable access and control over land as a production resource for rural women to enhance their meaningful contribution to food security and economic development,” said Agnes Mirembe, ARUWE’s executive director. 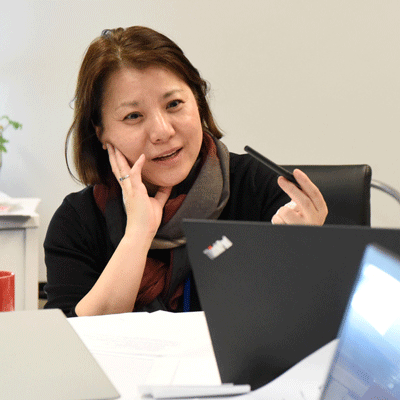 Sue Rheem is the Presbyterian Church (U.S.A.)’s Representative to the United Nations. (Photo by Rich Copley)

Such efforts are more critical now than ever. According to Rheem, there are more than 1.1 billion girls under the age of 18 whose lives, while unequivocally the most at-risk, simultaneously hold the most promise.

“This generation is set to become the largest generation of women in history ready to be leaders and change-makers,” said Rheem. “As followers of Christ, we are called to support the needs of girls to achieve gender equity, so they become future leaders for change.”

Bryce Wiebe, director of the Presbyterian Giving Catalog, also pointed toward the PMA’s call to be a Matthew 25 church and its emphasis on ministering to “the least of these.”

“The Church is at its best when we gather among the most vulnerable, just as Jesus did,” he said. “We are continuously grateful for the connections Presbyterians are making through gifts that reflect their sense of purpose and faith, with people in need all around the world.”

Back at Westminster in Lincoln, Peters reminded his parishioners that any household who was not present in worship on September 12 is still invited to receive their reverse offering envelope with $50, either on a Sunday morning or by making a request to the church office.

“I hope that Linda’s example inspires others to seek ways to care for women and girls this International Day of the Girl and every day,” he said.