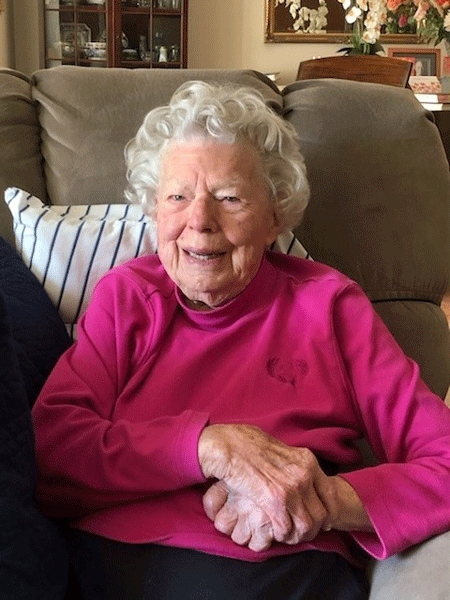 Whenever Kate Eisel speaks about her mother, Sylvia Ekberg, her eyes fill with tears and her voice swells with pride.

It makes keeping the fifth of the Ten Commandments a piece of cake.

Eisel, a deacon at Carmichael (Calif.) Presbyterian Church, the wife of retired Presbyterian pastor the Rev. Jack Eisel and co-leader of a women’s group in spiritual transformation, travels to the Bay Area every other week to help her sister Kris Aamot — Ekberg’s full-time caregiver — and brother-in-law Karl care for their mother. It’s Eisel’s way both of giving back as well as honoring their mother’s legacy.

Ekberg, who was born on April 14, 1922, grew up during the Great Depression in a small Christian tradition called the Plymouth Brethren. Despite the many hardships she and her family endured, Eisel said that her mother’s life was always full of joy and adventure.

After marrying Eisel’s father Bob in 1945 following his European posting during World War II, Ekberg and their family moved to the Bay Area and participated in establishing the new Sunnyvale Presbyterian Church, where Eisel and her sister were raised “in the context of faith, hospitality, gratitude and generosity.”

So many friends, in fact, that the Ekbergs developed something of a reputation in their close-knit California community.

“The little girl next door told her mom that ‘the Ekbergs must be famous,’” Eisel recalled, “as we had so much company all the time.”

Which gave the sisters a great idea.

When they saw their mother’s 100th birthday approaching, Aamot sent out a letter to all of Ekberg’s friends — over 200 of them — inviting them to send greetings and remembrances to their mother throughout the month to remind her of who she has been to so many.

“My mother taught by example,” said Eisel. “She was the organist at Sunnyvale Presbyterian, and then Moffett Naval Air Station for more than 40 years, and taught piano for all those years, but still found time to volunteer in nursing homes, hospitals, and, of course, in the church.”

And although many of Ekberg’s friends have long since departed, Eisel said that the response to their request was overwhelming. 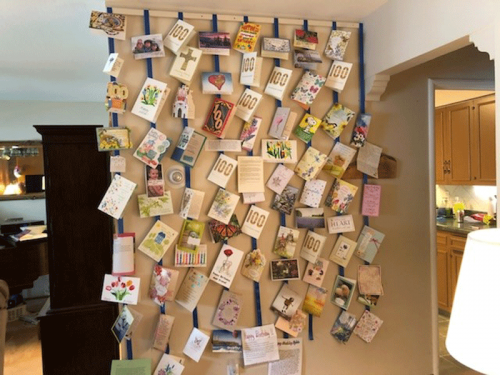 The wall of greeting cards and letters received by Sylvia Ekberg for her 100th birthday. There was another stack of 60 or so cards that hadn’t yet been put up. (Contributed photo)

“As we opened and read the loving memories of so many, we realized what an incredible influence she has had on so many lives over her 100 years,” she said. “She was referred to as ‘my other Mom’ by many. Her inclusion and acceptance were revered, and her listening ear and warm heart were often tender memories.”

One of those honorary daughters wrote Ekberg that of the many memories she has of her, she is “always smiling and shining God’s light right at [her].”

Shining God’s light by bringing hope to communities around the world is exactly what the Presbyterian Giving Catalog is designed to do.

Available both in print and online, in English, Spanish, and Korean, the Presbyterian Giving Catalog is filled with a wide variety of gifts that provide real and positive impact, including aid for refugees, access to clean water and help to end hunger.

The Giving Catalog invites Presbyterian support of Mother’s Day, Sunday, May 8, by offering such gifts as kitchen kits for families in need, teacher training for remote communities or a community garden for neighbors living in food deserts. 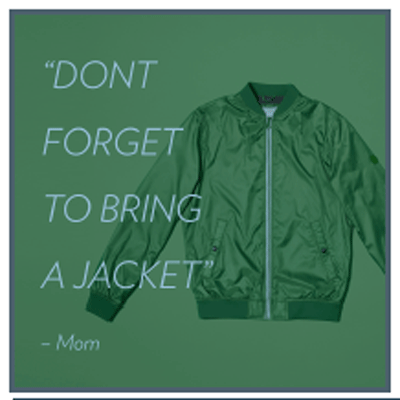 Personalized e-cards are available through the Presbyterian Giving Catalog.

Donors to the Giving Catalog will also have an opportunity to send a personalized e-card showing the impact that the gift given in their mother’s or other parental figure’s honor will make on the world.

Eisel said that although her mother is not always fully “present” these days, she nevertheless took in much of what was sent.

“Although I think it embarrassed her a bit, mostly she steeped in the memories and said how lucky she was to have had such a full life,” said Eisel. “We give thanks to God that so many of her ‘kids’ have gone on to shine God’s light on others, and now live with open hands in a world where generosity and acceptance are such precious gifts.”

Won‘t you join Eisel this Mother’s Day by making a gift through the Presbyterian Giving Catalog that spreads hope and helps create lasting, positive change around the world?

This was published for Presbyterian News Service on April 27, 2022.