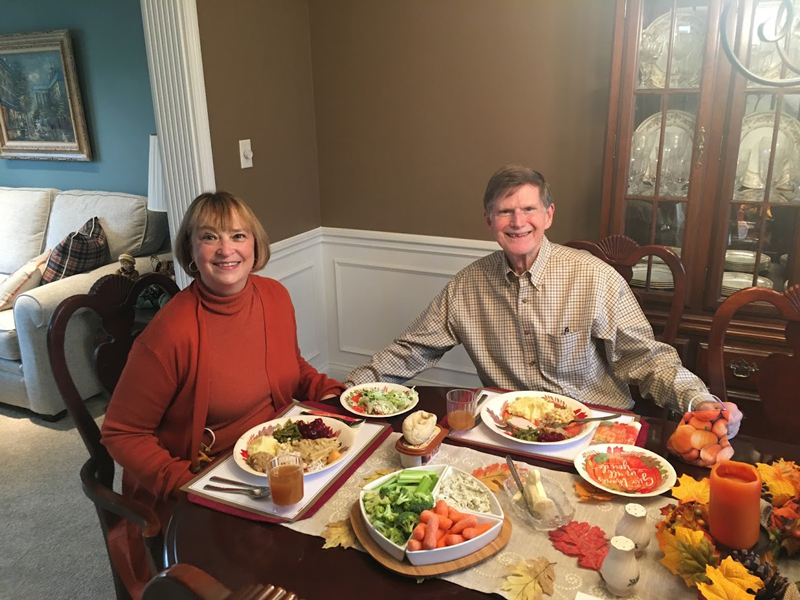 Giving generously in their golden years

Behind the admittedly corny saying that graces many a collectable coffee mug, “Ministers never retire, but are simply put out to pastor,” there lies a grain of truth — retiring church workers face some very real challenges.

Or so the Rev. Dennis Davenport and his Christian educator wife, Emma Sue, recently discovered.

“I retired from Eastminster Presbyterian Church in Evansville (Indiana) in March 2019 after serving there for just over 27 years,” Dennis Davenport recalled. “Within a month, we moved to Indianapolis where two of our three sons live, and where we discovered the truth of something I’d always been told. One of the most difficult adjustments in moving is finding a church home. That’s especially true for ministers, isn’t it? We visited several churches and never felt completely settled; and then COVID hit and made it that much more difficult.”

And, for the Davenports, their challenge wasn’t just a question of feeling at home in a new congregation. It was also very much about honoring their tithe.

“Although we always contributed financially to the different churches we visited through our tithe and various mission projects,” added Dennis, “now that we’re not visiting churches in person during the pandemic, we had to get creative.”

Already longtime advocates for the One Great Hour of Sharing and the Presbyterian Giving Catalog, the Davenports didn’t have to look far to find Presbyterian mission opportunities that they could support.

“Whenever we received the giving catalogs in the past, it seemed that we were always in the midst of paying college tuitions or meeting some other financial obligations,” said Emma Sue, “but God opened an opportunity for us that was kind of thrilling to me. Because Advent was coming, and we were trying to make it special during the pandemic to reinforce the message that God is still with us — that we still have purpose — we turned to the catalog as a true gift of thanksgiving for what God has done. We saw it in a new way.”

Now in its seventh, record-breaking year, the Presbyterian Giving Catalog — which is available both in print and online — is filled with a wide variety of gifts that provide real and positive impact around the world, including aid for refugees, access to clean water and ways to end hunger.

As their giving project began to take shape, the Davenports found that they had never had so much fun.

“We really enjoyed the idea of supporting things that we could then give as a Thanksgiving gift to our sons, daughters-in-law and grandchildren,” said Dennis, who, with Emma Sue, gave through the Presbyterian Giving Catalog for the first time in 2020. “Emma Sue spent days pondering over each gift. God has blessed us.”

In selecting the gifts, they looked for a personal connection between the catalog items and each family member’s past, present and future.

“To have people you know choose a gift for you makes it that much more prolific and meaningful,” said Emma Sue.

For their son, Andrew, the Davenports selected a fishing boat, since not only did he enjoy fishing with his late maternal grandfather, the Rev. Emmett C. Owensby, while he was growing up, but because he’s still very involved in the church to this day. “You might say that God is continuing to use his gifts to ‘fish for men,’” said his mother.

For their son, Derek, a PC(USA) minister of Word and Sacrament who serves as director of the Miller Summer Youth Institute and Digital Marketing Analyst at Pittsburgh Theological Seminary, they chose the catalog item, oxen and plow. “Dennis and my father took part in Derek’s ordination service,” recalled Emma Sue. “You might say they put the yoke on him.”

When it came to son, David — who, his parents said, “very much sees the dignity of each person” — the Davenports opted for the latrine, jerry cans and the irrigation pump. “Once when he was in Bolivia on a mission trip, he realized how difficult it was for people to find restrooms and running water,” said Emma Sue. “These were the perfect gifts to honor him because he sees the worth in everyone.”

For their three daughters-in-law, one who is an educator, one who is in business intelligence and one who is director of Strategic Initiatives, Special Projects and the Miller Summer Youth Institute at Pittsburgh Theological Seminary, they chose a catalog gift of teacher training, supplies for displaced students, winter heating fuel for refugees and the Women’s Empowerment Project. A farm animal for each of their grandchildren and a sewing machine in honor of the refugees with whom they work through the Exodus Refugee program completed their first-time catalog order.

“At Thanksgiving, when the Indianapolis branches of the family were together — safely during COVID — everybody opened their cards and showed each other what they had gotten,” Emma Sue said. “After they finished the meal, they opened each one. We had cut up the catalog and taped a picture of each gift to each of their cards. We wanted them to know they are a blessing to us and to others. They were really moved and touched by it, knowing that they were helping people.”

The elder Davenports acknowledged this as “a sacred moment, a holy moment” — and not by any means the only one they have experienced during the pandemic.

“Virtual teaching has allowed us to have a second grader, a Kindergartener and an 11-month-old grandson in our home,” said Emma Sue. “It’s a wonderful thing to have them here all day every day. As a grandmother, I was able to see our grandson sit up for the first time. That’s something that we otherwise would have missed.”

And, despite the pandemic’s many challenges, the Davenports don’t plan to miss a thing. Although they did have to forego plans to celebrate their 43rd wedding anniversary in Greece last year, they are already looking forward to what God has in store for their 45th.

“Maybe we’ll rally the whole family around the catalog again in honor of our anniversary,” they said. “Now wouldn’t that be fun.”

This was published for Presbyterian News Service on January 28, 2021.