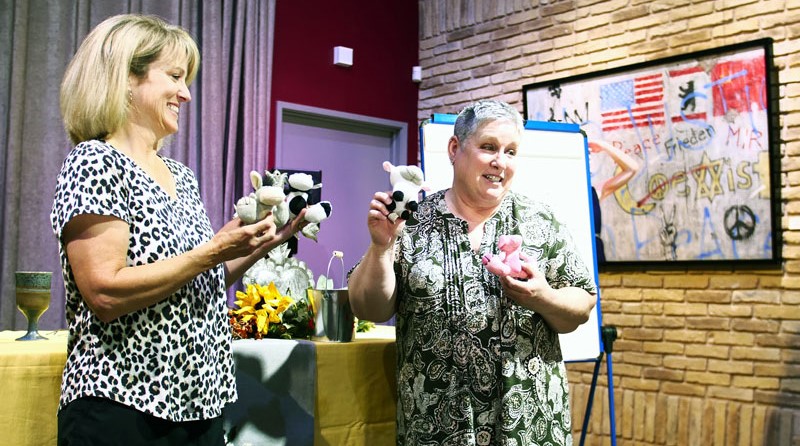 Doubling the giving by working together

Jenn Chow, a hospice nurse, ruling elder and member of the worship team at Living Hope Church in Port Hueneme, California, and her husband, Sean, associate for training and leadership cohorts for the Presbyterian Mission Agency’s 1001 New Worshiping Communities, know their way around new church plants and their leaders. And they really like them.

“I especially have a soft spot for the people who lead new worshiping communities, but who are not yet ordained as ministers, because that’s just a whole different area of pressure,” said Jenn Chow. “So, whenever our church reaches out to new congregations in the community, it fills not only a deep need that Living Hope has to shepherd another congregation along the way, but also to feel like we’re a part of something bigger than just us. It’s not unusual for our church to try to team up with others just to get the job done.”

Which is precisely what happened when Chow and Mickey Fenn, pastor and executive director of The Way Station Community — a new worshiping community that meets on Sunday afternoons in an art gallery in Camarillo, California — got together before Christmas last year to plan a joint mission project around the Presbyterian Giving Catalog.

Fenn, who is working toward ordination as a teaching elder, was a management professional in the medical and dental field for 30 years. A native Californian who had lived for 22 years in Colorado, where she was an elder and deacon at First Presbyterian Church of Colorado Springs, Fenn has known the Chows for years as friends and ministry colleagues in the Presbytery of Santa Barbara.

“Jenn and Sean are part of my family,” she said. “In fact, Sean and I were the ones who brainstormed the concept of what is now The Way Station Community, which is all about finding rest and connection, encountering Jesus and finding community.”

Fenn said that although The Way Station Community has done all kinds of local projects, she realized that they had not yet done anything globally. That’s when the Presbyterian Giving Catalog came in the mail. “I started looking through it, thinking that if we partnered with somebody else, we could double what we could do alone,” she said.

Now in its seventh year, the Presbyterian Giving Catalog, which is available both in print and online, is filled with a variety of gifts that provide positive impact around the world, including aid for refugees, access to clean water and help to end hunger.

“I loved the idea of a family farm, the animals, the tools and the instructions,” Fenn recalled. “After I took the idea to our vision committee, who loved it, I went to Jenn, and said, ‘Hey, do you think you would want to partner with us on this family farm? Here’s what it is, what it costs and this is what we’re trying to raise.’ She immediately said ‘yes.’”

Chow said the beauty of the Presbyterian Giving Catalog — especially when churches are working on a project together — is that not only is there satisfaction when a joint fundraising goal is set and met, but there is also a deep sense of gratification in the opportunity to make a specific impact on a group of people.

“What I really liked about the projects in the catalog that we were raising money for was that there was going to be actual education,” she said. “It wasn’t just, ‘Here, have some chickens and some cows, but we’re also going to help train you into how to best do what you need to do.’ I’ve always personally liked the idea of being able to try to give people the means to support themselves.”

In the end, both communities decided to raise enough money together to purchase a family farm and a beehive.

“The kids liked the bees,” Chow said. “Even though they’re kind of afraid of them, they thought it was really cool that someone could make their own honey.”

Although the joint project was originally intended to conclude at Christmas, both congregations preferred to hold it open for three or four extra weeks until the goal was met, and, in fact, was exceeded. The two communities ultimately raised enough for the family farm and two beehives.

As the two longtime friends — together with Living Hope’s pastor, Ron Urzua, and leaders in both congregations — look again toward partnering on the catalog at Christmastime, they anticipate challenging their respective communities to again surpass their goal, even in a post-COVID-19 world.

“In my minutes for mission last Advent, I talked about our strong giving history,” Chow said of the intercultural, multigenerational Living Hope Church, itself the result of the 2015 merger of Westminster Presbyterian Church, Port Hueneme and Word of Life Presbyterian Church, a former new worshiping community. “I reminded people that while we’re all individual churches, we’re all tied together and we have a responsibility to not act just on the things that are going to affect us and our local community, but worldwide. I also reminded everyone that we have a responsibility to give, not because we have to, but because we want to worship and bring glory to God.”

This was published for Presbyterian News Service on November 2, 2020 and originally appeared in the November/December 2020 issue of Presbyterians Today.