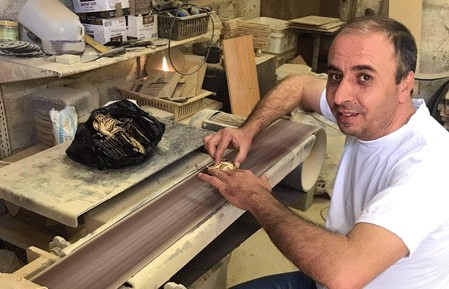 Following the recent chaos and conflict in the Middle East — which has been characterized by BBC News as the worst violence experienced by Jerusalem and other cities in the region since 2017 — the 48-year-old Palestinian artist’s hands instinctively began to shape a dove of peace.

“Living under occupation with a lot of violence and inhumanity,” said Qumsieh, “I very much enjoy seeing how a piece of olive wood, which represents our identity, the tree of life and peace, converts into a symbol of the thing that is most needed by us. Peace.”

Although Qumsieh has tried many different jobs through the years, he ultimately chose a life in craftsmanship. “Art is the best way to express what is in your heart,” he said.

And now, thanks to a commission that Qumsieh received from the Presbyterian Giving Catalog, the elusive gift of peace that he has so beautifully embodied in his Peace Dove Christmas ornament, will itself be a gift to donors who support the 2021-2022 Giving Catalog with gifts of $150 or more this year.

Now in its seventh year, the increasingly popular Presbyterian Giving Catalog — which is available both in print and online as well as for immediate download in Spanish and Korean — is filled with a wide variety of gifts that provide real and positive impact around the world, including aid for refugees, access to clean water and ways to end hunger. The 2021-2022 Giving Catalog will be available online and in the mail in September. 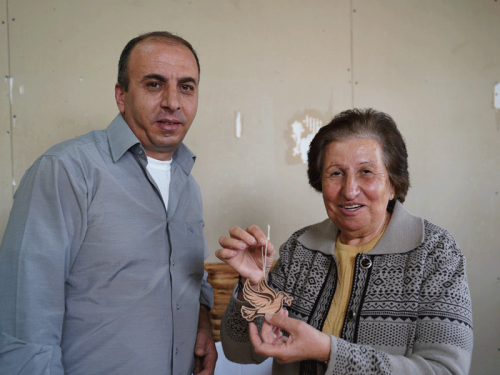 “I am excited that my first order will go to a church organization because it will bless me just as my mother has always done,” said Qumsieh, who readily cites his mother, Diana, as an example of someone who has always defied any obstacle in her way and, to this day, stands ready to help and guide her four sons and her daughter.

In addition to his mother, Qumsieh also credits his father, Najiwas, with instilling in him a love for creating traditional crafts. The elder Qumsieh, also a skilled craftsman, is a founder of the Holy Land Handicraft Society (HLHCS) in Beit Sahour, Palestine, a cooperative of 2,000 artisans who make ornamental crosses, nativity sets, ornaments and figures from olive tree sprouts and prunings. The society’s aims made it an ideal match with the Giving Catalog, which has always offered its donors at the $150 level and above a beautiful, Fair Trade artisan, handmade ornament.

“When it comes to thanking our generous Catalog donors by creating a special symbol of the Christmas season just for them, we’ve only ever reached out to Fair Trade artisan groups as our partners,” said Bryce Wiebe, director of the Presbyterian Giving Catalog for the PC(USA). “Not only does this year’s Peace Dove ornament allow us to remember in our prayers families like Hussam’s who yearn for peace, but it is also an example of the way that we live out our Church’s commitment to the values and principles of Fair Trade.”

According to Jessica Maudlin Phelps, associate for Sustainable Living and Earth Care Concerns in the Presbyterian Hunger Program (PHP), the PC(USA) has been involved in Fair Trade since 2001, when the Presbyterian Coffee Project was launched.

“As people of faith, we are called by God in Christ to bring good news and to proclaim release to those held captive by human structures and injustices,” said Phelps. “Fair Trade is one way we can participate in the Good News. As part of the PHP’s mandate to ‘alleviate hunger and eliminate its causes,’ which comes to us from the Common Affirmation on Global Hunger, we strive to walk with people in moving towards sustainable personal and corporate lifestyles that restore and protect all of God’s children and Creation. One of the many ways we do this in an empowering way is through promoting the economic model of Fair Trade.”

In fact, it was Phelps who was responsible for introducing the Giving Catalog’s project manager, Teresa Mader, to Wendy Farmerie, sole proprietor of the Silk Road Fair Trade Market, who subsequently connected Mader with Qumsieh and the HLHCS. A former international buyer, Farmerie was motivated to start her business after traveling overseas and seeing the health risks faced by workers in a Bangkok ceramic factory and a glass factory in Poland. 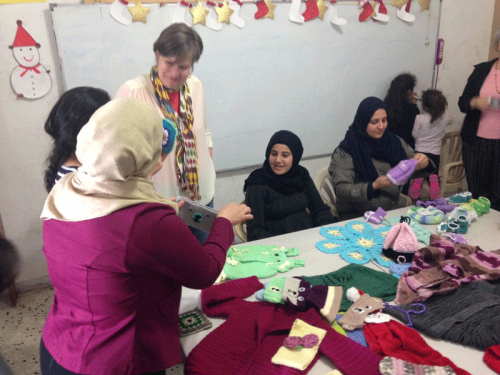 “I started the Silk Road in 2006 with a mission to make the world a better place, founded in a belief that every human deserves to be treated with dignity and respect,” said Farmerie, a member of New Wilmington (Pa.) Presbyterian Church in the Presbytery of Shenango, where she has served as both a ruling elder and deacon.

PC(USA) churches who currently host handicraft fairs or alternative giving markets or who house Fair Trade shops within their congregations are already aware of the benefits of Fair Trade, which allows producers to provide for their families, live with increased dignity and tell their stories — stories like Qumsieh’s.

“We have a dream of peace,” said Qumsieh. “We believe that sharing our missions are tools to reach our aspirations like alleviating local poverty, sustaining our handicraft traditions and stopping emigration, which is an element in our reality, particularly among young Christians who also live in the Holy Land. When people buy our crafts, support our projects and improve the working conditions of our workshops, they are supporting our Christian community.”

It’s a dream that Farmerie believes may one day be a reality.

“The peace dove embodies my hope for the entire world right now,” she said. “From the recent violence in the Holy Land to global insecurity and upheaval caused by the pandemic to our own struggle with intolerance here in the United States, it’s a concerning time to be navigating life. I truly hope the next year is one that leads us closer to peace and harmony with each other.”