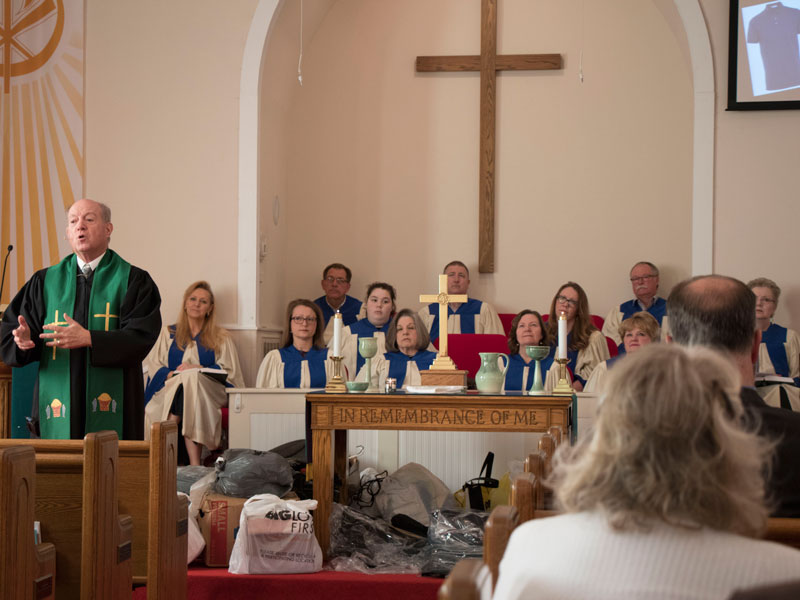 Sherrill’s Ford Presbyterian Church has a tenacious grip on the good that a sure-footed creature can bring to impoverished communities overseas.

This 99-member congregation in rural North Carolina collected $12,104 for 68 pairs of goats this spring through the Presbyterian Giving Catalog. Every March the congregation observes “Goat Month” and highlights how goats improve people’s lives in the developing world.

The congregation’s generosity this year builds on an already impressive track record of goat giving.   Last year, Sherrill’s Ford contributed $4,450, or 25 pairs of goats.  In 2017, the congregation gave $3,026.

Why the large increase this year?  A stepped-up emphasis on the difference a pair of goats can make for a family was one of the reasons cited by Russ Reighley, who, along with his wife, Marcia, provides pastoral leadership for Sherrill’s Ford as commissioned ruling elders.

The catalog points out that the milk, cheese, butter, and yogurt that goats produce enhance nutrition for people who need it most. Goats are among nearly 40 giving opportunities in the catalog. The catalog’s items exemplify the variety of ways Presbyterian Mission does its work.

It’s a spiritual vigor that is being demonstrated through numerical growth and mission engagement.  The congregation’s membership of 99 reflects a net increase of 13 members over last year. When the Reighleys arrived six years ago, Sherill Ford’s membership was 59.

Sherill’s Ford’s local outreach includes stocking a clothes closet at a local elementary school and joining with other congregations to makes sure students in need have food for the weekend. Sherrill’s Ford members prepared a Thanksgiving meal for students at an alternative high school that serves youth who have behavioral issues, and they helped with a Career Day at that school in conjunction with a local community college.

Every month the congregation hosts a free community meal for anybody who wants to come and enjoy it.  Its newest community initiative is its “Blessing Box,” a box that sits in the congregation’s parking lot that contains food items that are free for the taking.  It also invites contributions of food for people who want to help.

“We probably go through 50 items of food in a day, and we not only have non-perishable food, but we’ve expanded it to include baby supplies, cleaning supplies, and toiletry items,” Reighley said.  The box is a large cabinet that is supported by four legs and is covered by a pitched roof.  Glass doors allow potential clients to see what’s inside.

The box’s popularity surprised Reighley. “I was not aware of the amount of food insecurity that we have around here,” he said.

One beneficiary of the Blessing Box dropped by Reighley’s office to express his thanks and asked Reighley if he could say a prayer for Reighley.  The man grabbed both of Reighley’s hands and started to pray. “He basically said that this church through the Blessing Box had kept his family alive during the winter,” Reighley said. “He gets done praying, gives me a hug, and walks out, and I’m just dumfounded.”

The local outreach “has really opened up our hearts to the international work,” Reighley said. In addition to an emphasis on goats in March, the congregation observes “Garden Well Month” in October. Last year the congregation gave $9,000 to purchase six garden wells through the catalog. These wells give communities a safe and convenient source of water.

Sherill’s Ford, an unincorporated community 35 miles north of Charlotte, is primarily a farming community. However, development along nearby Lake Norman has brought a host of newcomers to Sherrill’s Ford and its Presbyterian congregation.  “We have lakers and farmers, and they get along awfully well,” Reighley said. “They support each other and enjoy each other a lot.”

This was originally published for Presbyterian News Service on May 22, 2019.