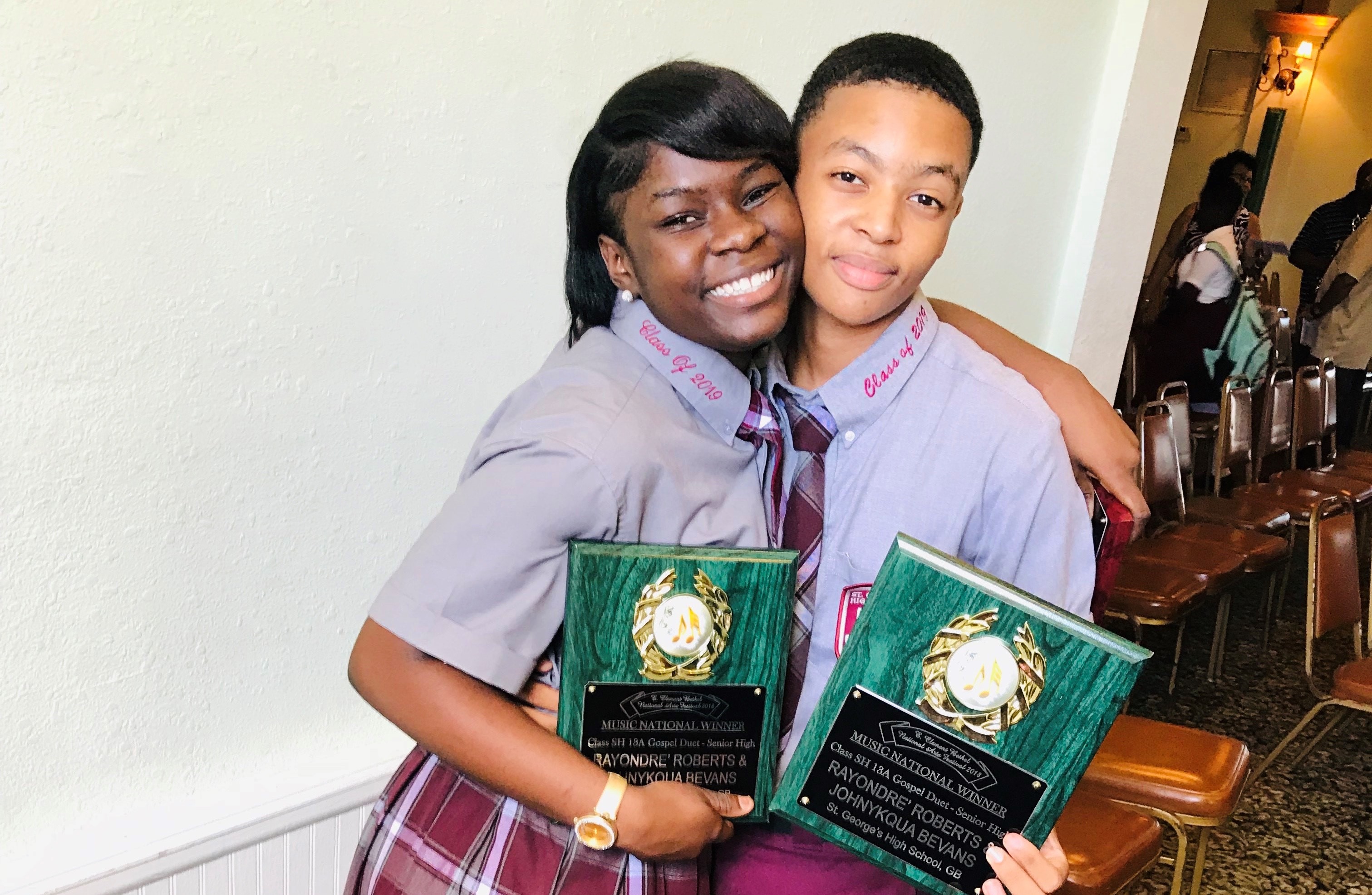 When home is a world away

At first, nothing about Stillman College reminded Johnykqua Bevans and Rayondre Roberts of their home on the tropical island of Grand Bahama: not Alabama, not the food, not their classmates and not the as-yet unfamiliar Presbyterian tradition in which the college is steeped.

But then there was the choir.

Because the second cousins grew up singing in the Pentecostal church and were later lead singers in the pop band at their alma mater, St. George’s High School in Freeport, their decision to attend the small, close-knit, Presbyterian-related college in Tuscaloosa wasn’t perhaps the surprising leap of faith that it seems.

Stillman’s nationally-renowned concert choir — and the college’s president, Dr. Cynthia Warrick — were powerful draws, inviting Bevans and Roberts to transcend the many differences between their contrasting cultures to claim the joy and the promise of the music of their shared Christian heritage. 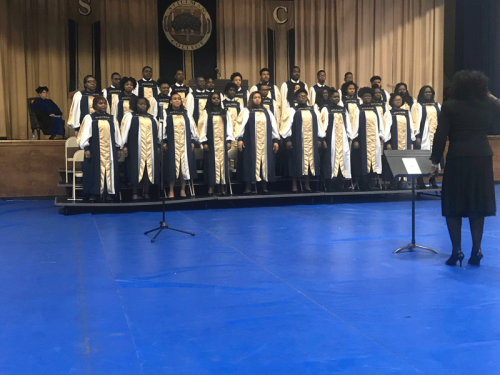 It was in May 2019 that Warrick, Stillman’s seventh and its first woman president, visited St. George’s High School, from which Bevans and Roberts were about to graduate. Because she was immediately impressed with the popular singers, she spoke to them about becoming members of the Stillman College Choir.

Roberts explains how music became a point of connection.

“Since our high school was the only one with a big music department, she came straight to us. When she heard us sing, she gave us a whole presentation and offered each of us a scholarship. It was the first time I really got the feeling that I could do music as a career.”

At the time, Bevans said that she and her cousin knew little about Stillman College.

“You don’t normally see a woman president of colleges,” she said. “Back then, I really didn’t know the difference between HBCUs [Historically Black Colleges and Universities] and other colleges, so when I got to Stillman, I asked what it was. Then I was really impressed and proud of my high school that an HBCU president came to visit.”

Neither did Bevans know much at first about the Presbyterian Church (U.S.A.), which she came to know and appreciate primarily through the college’s weekly Thursday morning chapel services.

Stillman College, situated on a 105-acre campus in Tuscaloosa, Alabama, was founded in 1876 by a group of Presbyterians led by the Rev. Dr. Charles Allen Stillman, pastor of First Presbyterian Church of Tuscaloosa. Stillman submitted an overture to the General Assembly of the Presbyterian Church in the United States (PCUS), a predecessor denomination of the PC(USA), requesting the establishment of a training school for African American ministers.

Today, with its expanded mandate and mission, the college is “committed to fostering academic excellence, to providing opportunities for diverse populations, and to maintaining a strong tradition of preparing students for leadership and service by fostering experiential learning and community engagement designed to equip and empower Stillman’s students and its constituents.”

Gifts to the PC(USA)’s Christmas Joy Offering, a cherished Presbyterian tradition since the 1930s, help Stillman to provide scholarships to such gifted and promising students as Bevans and Roberts. The annual offering distributes gifts equally to the Assistance Program of the Board of Pensions and to Presbyterian-related schools and colleges equipping communities of color.

Because of Stillman’s historic and formal affiliation with the PC(USA), Bevans and Roberts have been, in effect, ambassadors for the denomination as members of the college’s choir, which had an extensive touring schedule before the COVID-19 pandemic brought to a halt not only all in-person rehearsals, but also all live concerts.

Among the highlights that Bevans and Roberts fondly recall was a trip to San Antonio, where they sang for the funeral of a former college board member, Houston Harte, and an annual concert at Westminster Presbyterian Church in Birmingham, Alabama, during Black History Month, where both had solos.

“You get to see the expressions on people’s faces, with many people crying because of the way we sing,” said Bevans. “It was really nice to touch others’ hearts.”

Bevans said that she became even more grateful to the PC(USA) after Hurricane Dorian hit Grand Bahama late in the summer of 2019, devastating their island home. Because both Bevans and Roberts lost family members in the natural disaster while they were away at school, they were embraced and supported by their classmates as well as members of the faculty, staff and administration, until they could return home to be with family, which the college made possible for them to do over Christmas. 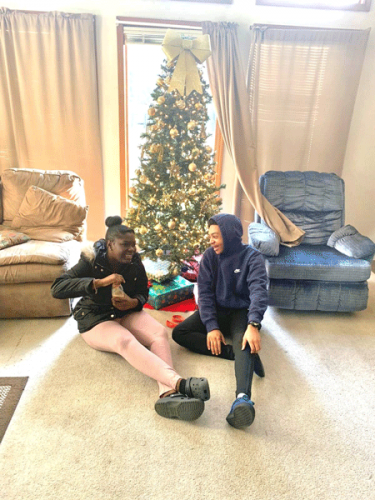 “Thank you to the Presbyterian Church for coming to our aid after the hurricane,” said Bevans.

In fact, when Warrick became aware of the devastation affecting these students’ families, she contacted the Rev. Edwin González-Castillo of Presbyterian Disaster Assistance. The agency responded with additional financial assistance to help cover costs not included in their scholarships. This assistance from PC(USA) has enabled Bevans and Roberts to mature as young adults in the safety of the college as their families in Grand Bahama work to recover their stability after first being hit by the hurricane and then by the pandemic.

Despite the changes in family, campus and academic life brought on by the pandemic, both Bevans and Roberts are looking forward to the future.

“I just changed my major to psychology to see where that takes me,” said Roberts. “I have a cousin who did music the first two years and psychology the last two years. They do music therapy now and are very successful with that. Because of my love for music, that’s something I also want to consider.”

As for Bevans, she hopes that with a major in criminal justice she might one day become a detective with her own agency back in the Bahamas.

Such dreams are now more than possible thanks to the gifts of generous Presbyterians.

“I think a lot of people may not realize how many lives they can affect just by their support,” Roberts said. “It’s a simple fact when they give students a scholarship, especially those students who are really in need, it’s the best thing that could happen to them. It changes their lives.”

Give to the Christmas Joy Offering to help Presbyterian-related schools and colleges equipping communities of color provide life-changing experiences.

This was published for Presbyterian News Service on December 2, 2021.

‘In our living, in our giving, we are there’

A lifeline for students and pastors in need

Finding the right road through times of financial hardship