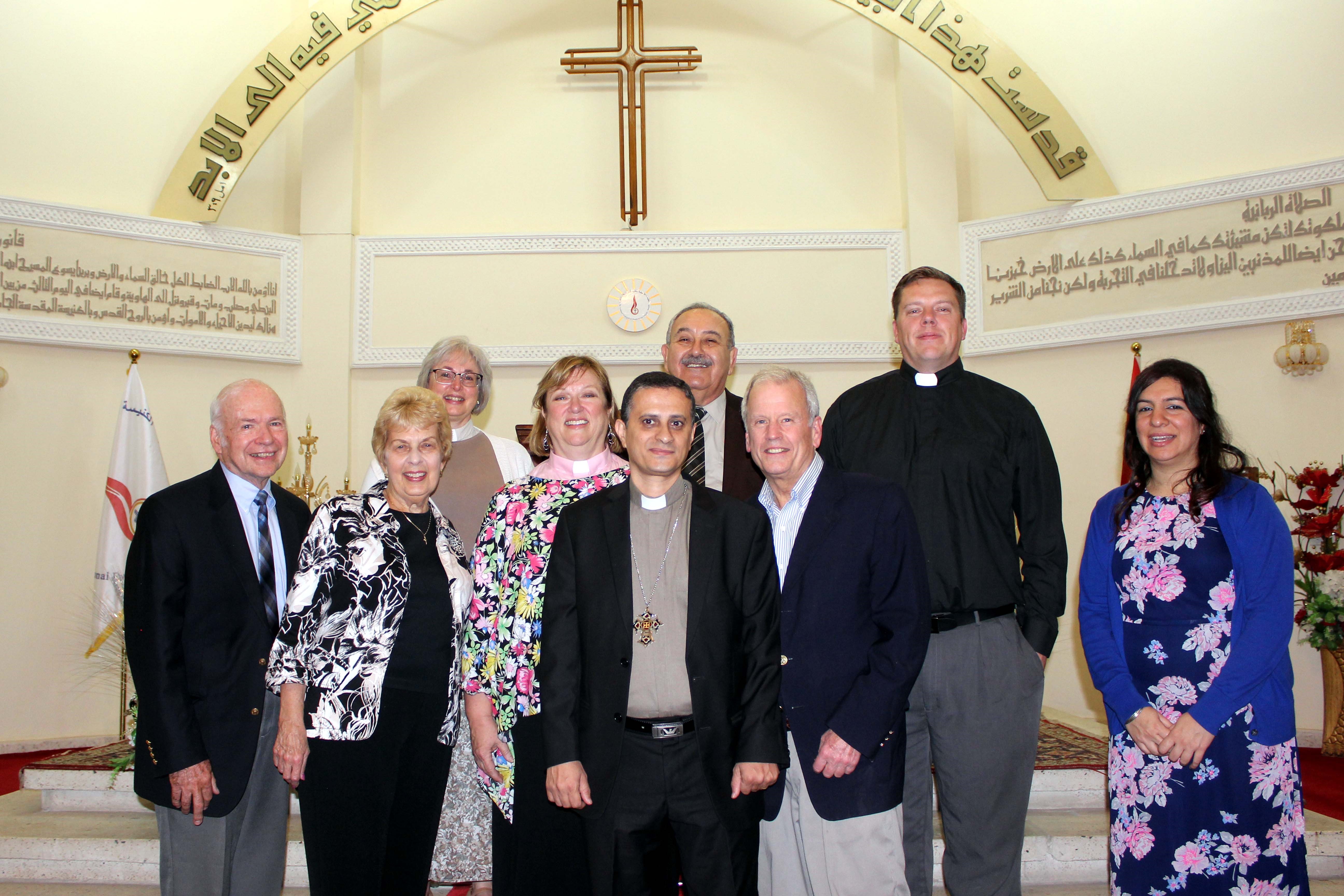 Fifteen years after being sent to Iraq as a U.S. soldier, the Rev. Matthew Fricker felt compelled to return in response to a higher calling.

“I felt affection for the country, and I could feel God calling me back to this place because of the needs of the churches over there and the needs of all the Iraqi people,” Fricker said. That calling, he added, extended to his personal need for healing and reconciliation.

Last November, Fricker, the associate pastor at John McMillan Presbyterian Church in Pittsburgh, was among eight members of the Iraq Partnership Network who travelled to Iraq. The network is a Presbyterian group whose members share a common interest in building relationships with Iraqi Christians and sharing in mutual ministry with them.

On their trip, they visited the three small Presbyterian congregations that remain in Iraq. Presbyterians and other Christian groups have experienced a massive membership decline due to emigration. Since 2003, hundreds of thousands of Christians fled the country to escape the war, the devastation left in its wake and, most recently, the intense persecution at the hands of ISIS.

Fricker was deeply moved by what he experienced in Iraq. “I sat with people and we talked about our families, war, rebuilding and hope for a brighter future,” he wrote in a Facebook post shortly after arriving in Baghdad. “We talked about reconciliation in partnership. We talked with passion about unity in peace. What I received from the people I met was healing … it was true love.”

The average membership of the Presbyterian churches in Baghdad, Basra and Kirkuk is no more than 50, but their determination to make a difference impressed Fricker. All three operate well-respected primary schools that educate mostly Muslim students and are filled to capacity. He noted parents’ appreciation of the schools and how their interaction with pastors and Christian teachers helped build positive Christian-Muslim relationships.

Pittsburgh Presbytery helped fund Fricker’s trip through the presbytery’s share of the Peace & Global Witness Offering. The Rev. Henk Bossers, chair of the presbytery’s Peacemaking Committee, said the presbytery has had some connections in Iraq for several years and has hosted Presbyterian visitors from that country. The committee, he said, hopes that interest in Iraq will grow as Fricker shares about his trip. In addition, Bossers emphasized the committee’s support of Fricker’s dream of getting more Iraqi War veterans involved in the country.

“I want people to see the joy of partnering with brothers and sisters in Iraq,” Fricker said. “I want former service members to know there is an opportunity for reconciliation.”

Presbyterians in Iraq want to expand their schools and continue nurturing better relationships with the communities they serve. Fricker explained that they are committed to building the Christian witness in Iraq in ways that stay within the government’s restrictions on proselytizing.

Iraqi Presbyterians, he stressed, would like more Presbyterians in the United States to walk alongside them in their efforts. “God does great things through partnership,” he said, noting that the relationships are valuable to all involved. Fricker, whose congregational responsibilities include youth work, said he has had rich conversations with a counterpart in Iraq about youth ministry.

While in Iraq, Fricker learned that the country’s Presbyterians are open to dialogue with U.S. veterans who served there. He is reaching out to veterans and wants to connect them with Iraqi Presbyterians through texts and emails, and possibly through visits. “True healing and peace can come out of these kinds of conversations, these kinds of partnerships and these kinds of visits,” he observed.

“We are highly supportive of what Matt is doing,” Bossers said. The initiative in Iraq is just one of the Peacemaking Committee’s ministries that is helped by the Peace & Global Witness Offering. Other causes supported by the committee include environmental stewardship, peace in Israel/Palestine and non-proliferation of nuclear weapons.

Across the Presbyterian Church (U.S.A.), congregations and mid councils use their shares of the Peace & Global Witness Offering to work for Christ’s peace on local and regional levels as well as extend their witness to more distant places. PC(USA) mission co-workers are sometimes called upon to help connect Presbyterians with these opportunities, as Elmarie Parker, who facilitates relationships with partner churches in Iraq, Syria and Lebanon, did for the Iraq Partnership Network. Twenty-five percent of the Offering is retained by congregations, and 25% goes to mid councils. The remaining 50% is used by the national church to support its peace and reconciliation ministries.

Peace in Iraq and throughout the Middle East is one of the causes supported by the national portion of the Peace & Global Witness Offering. For example, the Presbyterian Ministry at the United Nations works alongside secular, interfaith and ecumenical organizations in pursuit of peace in the region. Together, they strive to protect U.N. Security Council mandates, look out for the safety of non-combatants and advocate with the U.N. as it provides shelter, food and medical care to people affected by war.

Most congregations receive the Peace & Global Witness Offering on World Communion Sunday, which this year falls on Oct. 6.

This was originally published for Presbyterian News Service on September 25, 2019.