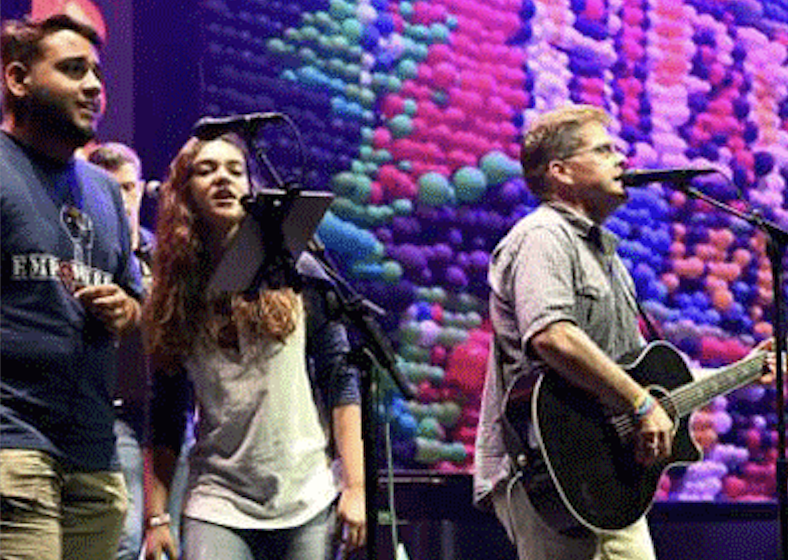 After sharing last month the free downloadable resources created to inform possibilities for Triennium-related celebrations in the local context, Gina Yeager-Buckley jumped at the chance Monday to bring along some of the talented people who created the resources related to group study, recreation, and worship and prayer — and are on the verge of creating even more resources in the weeks to come.

The three resources published to date can be downloaded here, here and here.

“I’m more excited about these three resources and what’s coming next than about anything we’ve done in a long time,” Yeager-Buckley told Dr. Bill McConnell, interim director of Special Offerings, during Monday’s edition of Between Two Pulpits, which returned after being on hiatus for General Assembly. Yeager-Buckley is Associate for Presbyterian Youth and Triennium. Hear the 30-minute conversation here.

Joining Yeager-Buckley and McConnell on Monday were:

Helping to write the Group Study Guide “was one of the most interesting ministry experiences I’ve had in a long time,” Adler-Brammer said. “I am a lifelong Triennium attender and there was some sadness” when the announcement came that Covid had cancelled the highly anticipated event. “Then it quickly shifted to excitement” after the planning team decided “we could share the experience.”

The writing team “looked at different ways young people would be coming together” and for “themes to say, ‘how can we fit those gatherings so we can write resources for camp, week-long use, and weekly resources for young people?’ We thought about different options and activities and different venues, which made it possible to have some creativity outside of just that one setting. We said, ‘What are the different entry points?’ and then we offered the resource in that way.”

Wilkinson said the writers of the Recreation resource asked, “What is the theology behind why recreation and play are important? How can people let go of what hinders them?” The team sought to recognize the many differences among youth. “Some have high energy and some are wallflowers,” Wilkinson said. “You try to even the playing field for kids to make sure everyone can be themselves and fully participate together. We tried to tear down walls so kids will feel included.”

From casual events to the end-of-the-year blowout, “We tried to make everything fun and inclusive, to make sure people felt part of the group no matter what you’re doing,” Wilkinson said.

Marsh said the team that wrote the Worship and Prayer resource “wanted Matthew 25 to be the focal point of all three worship experiences.” The team used other texts to get youth “to look at Matthew 25 [and its theme “when did we see you?”] from different angles. And we tried to express various ways of seeing — not just physical seeing, but seeing with our hearts and our minds, different ways of connecting with the world and the people around us.”

Another goal is that youth “will be seen and known” for their “fully authentic selves. That’s front of mind for many young people figuring out where they belong and who they will be in life,” Marsh said.

Lundy said the Event Planning Guide, which will be available in a few weeks, is being designed as a one-stop shop for organizers putting on events for people of all ages.

Events can be designed for youth, or they can be intergenerational, Lundy noted. “You can take what you want and apply it to your situation,” Lundy said. “That’s the awesome thing.”

“It’s snowballing,” McConnell said after hearing all their ideas. “I realize it’s the dead of summer, but it’s growing and it’s finding its own life, and I think that’s really exciting.” The guides that are being developed may be thought of as resources for people doing youth ministry, McConnell said, “but it really works across the generations.”

The second phase, also being developed by PC(USA) and Cumberland Presbyterian Church partners, will once again center on the “When did we see you?” theme, Yeager-Buckley said.

Planned resources include one that describes how churches and other groups can develop an interactive prayer center, one of the most popular stations at in-person Triennium events.

Another is a Mission resource, which will feature “connective, meaningful, and healthy mission opportunities, trips, projects and prayers,” Yeager-Buckley said.

Yet another is a Song and Music Supplement, which will take several months in order to allow the Nettletons, the house band formed for the cancelled Triennium, to record a number of hymns and spirituals for use in the local setting. “If you are a little church, it is so helpful to have an example of what something sounds like,” Yeager-Buckley said. “Or just hit the ‘play’ button and you’ll have the song performed beautifully and professionally.”

“Thanks for the decisions you’ve had to make,” McConnell told the group, including the decision to cancel the in-person Triennium. “From those tough decisions, something great is growing.”

“And thanks for serving the church with energy, intelligence, imagination and love,” McConnell said. “Those are four things we hear often but maybe not often enough.”

Presbyterian Youth Triennium is supported by gifts to the Pentecost Offering, one of the four Special Offerings of the PC(USA). Sixty percent of Pentecost Offering gifts go to the national church to support work with youth, young adults and children at risk. Forty percent is retained by the local church for ministries with youth. Learn more here.

Between Two Pulpits airs most Mondays at 1 p.m. Eastern Time. It can be seen here.