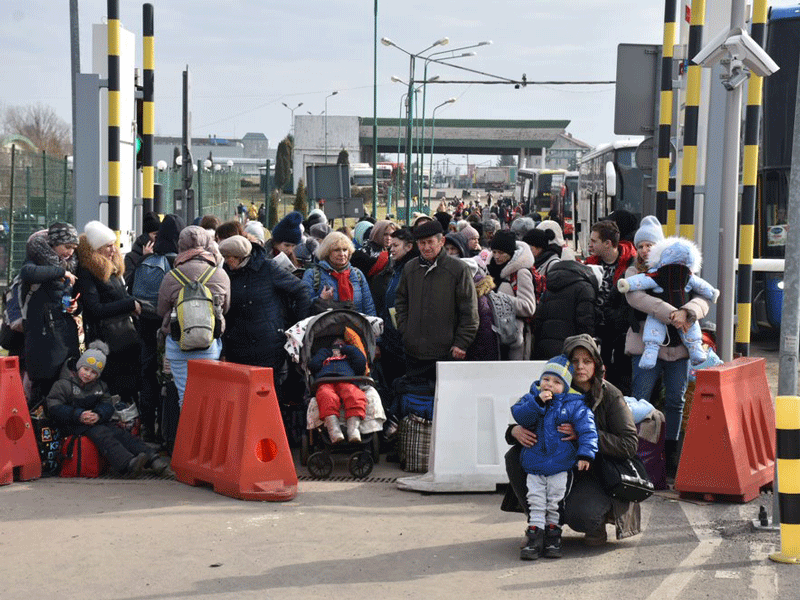 Asked during Monday’s Between Two Pulpits broadcast to discuss the need that’s on the hearts and minds of people around the world — the care and safety of millions of Ukrainian refugees and displaced people — Susan Krehbiel said what we often forget is that those who have fled the fighting “just want to go home. In these early days of war, people want to stay as close to home as possible. Once you are separated, it can be really hard to be reunited.”

Krehbiel, associate for Refugees and Asylum with Presbyterian Disaster Assistance, was the guest Monday of Special Offerings’ Dr. Bill McConnell and Lauren Rogers. Listen to their 24-minute conversation here. An update on the work being done alongside partners of the PC(USA), as well as a bulletin insert, can be found here. 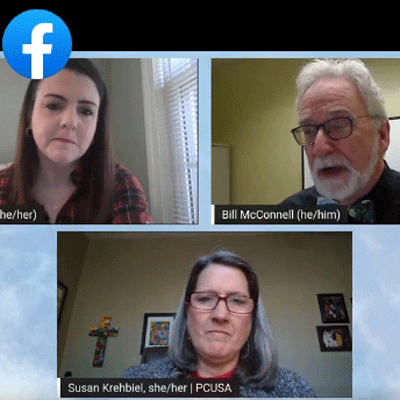 “It is a crisis situation. People are running for their lives, and there is damage all across the country,” Krehbiel said. Even people not directly impacted by the violence have lost access to water, electricity, “all sorts of basic needs,” Krehbiel said. PDA is working alongside partners in the region, including Lutheran World Federation, Hungarian Interchurch Aid and “a number of other organizations who know how to get this work done,” Krehbiel said.

“They know how to work in partnership with the locals so they can get the aid where it’s needed,” Krehbiel said. “We’re talking about a very large crisis, but it is in Europe. There’s food in Europe. There’s clothing available in Europe. We don’t need to ship those things from here. They can purchase them there and they have the expertise to know how to disseminate those goods to people in the region.”

In addition to giving, “we can pray for them and advocate for peace,” Krehbiel said. “Peace talks haven’t been successful yet, but we need to keep up hope, because as we said earlier, people eventually really want to go home — and that means peace.”

Krehbiel thanked Presbyterians who have faithfully supported the One Great Hour of Sharing Special Offering. “It gives us readiness to respond when a crisis comes up,” Krehbiel explained. “We often say the church may not be the first one in, but we are often the last one out. We know this will be a long-term response.”

Krehbiel also pointed to the informational webinar set for noon Eastern Time on March 23, “Lifting Up Ukraine: PC(USA)’s Humanitarian Response.” The webinar, which will be available here and here, is being put on by PDA, Presbyterian World Mission, the Presbyterian Ministry at the United Nations and the Presbyterian Peacemaking Program.

Asked about which of the Revised Common Lectionary passages for Sunday preachers might turn to, Krehbiel at first said, “uh-oh,” owing to their difficulty. “Maybe this should be one of the weeks we should talk about the 90 texts that talk about welcoming the stranger,” was her initial response, she said.

“Then I looked at the psalm (Psalm 63:1-8),” Krehbiel said. “What if I were in the midst of a crisis. How would I hear these words?” (“O God, you are my God, I seek you, my soul thirsts for you; my flesh faints for you, as in a dry and weary land where there is no water.”) When we’re in difficult times, she told McConnell and Rogers, it’s important to remember the scriptures and the faith of our forebears. “What better prayer for someone to be praying in the midst of a crisis?” Krehbiel asked.

That reminded her of a friend, a former refugee from South Sudan. When war came to their village, the women gathered at church, where they could hear the sounds of the fighters drawing near. “The women started singing,” Krehbiel said, “and they kept on singing until they couldn’t hear the fighters anymore. I just think about what that would be like.”

The other Old Testament text for Sunday comes from Isaiah 55:1-9, which speaks to people who have been thrust into any large crisis: “Ho, everyone who thirsts, come to the waters; and you that have no money, come, buy and eat! … See, you shall call nations that you do not know, and nations that do not know you shall run to you …”

The author “was not thinking of Ukrainian refugees when those words were written,” Krehbiel said. “This is imagery, but this is what came to me as I thought about” Sunday’s scriptures.

Then there’s Luke’s account of Jesus’ parable about the barren fig tree. 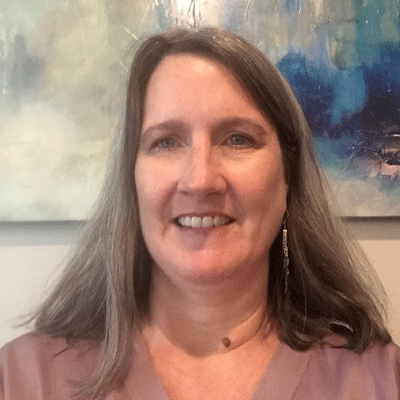 “We’ve all gone through these periods. We wonder: Are we doing this work in vain?” Krehbiel said. “What came to my memory is how much waiting is part of a refugee’s life.” The refugee waits for aid, and “once you’ve fled, you’re waiting for the opportunity to go home.”

Until Ukraine, Europe’s most recent large emergency was in the former Yugoslavia during the mid-1990s. Krehbiel met some survivors of the Srebrenica massacre, including a woman who’d been living in a refugee camp for three years. During the first two years, she’d decided not to plant tomatoes there because “she had such hopes of returning that she didn’t believe she’d be there long enough to see the fruit,” Krehbiel said. “Finally, she decided to plant the tomatoes because she would be there long enough to harvest them.”

“That’s so beautiful,” Rogers told Krehbiel, adding that parable of the fig tree “is the perfect passage not just for the refugee crisis but for so much of what PDA does … It’s going to take a while for people and ecosystems to recover. There’s a lot of patience in your work.”

“So often, we talk about rescue and aid efforts as if we are the people of faith coming with all these gifts,” Krehbiel said. “My experience has been it’s the refugees I meet and the people I meet in this work who help me see the strength of faith. I am always in awe when I witness that.”

In fact, she said when asked about her hope for the future of the Church, it’s that “we really do live into seeing Christ in everyone we encounter, that we offer assistance and service always with humility to others, because really, they know their needs. We don’t have to go in and tell them that we can have the faith of that psalmist. Even when we can’t see the way forward — when we don’t even know there is a way — we can believe that God will provide a way.”

McConnell closed with prayer, lifting before God “our siblings who are in harm’s way and are fleeing for their lives … and for those who will be serving them as they cross into new places, into situations they have never experienced before. Give them safety and give them strength. Uphold them by your Spirit. Thank you for the opportunity to partner with those who serve them, that we may be your hands and feet, and that in each of them we may see you.”