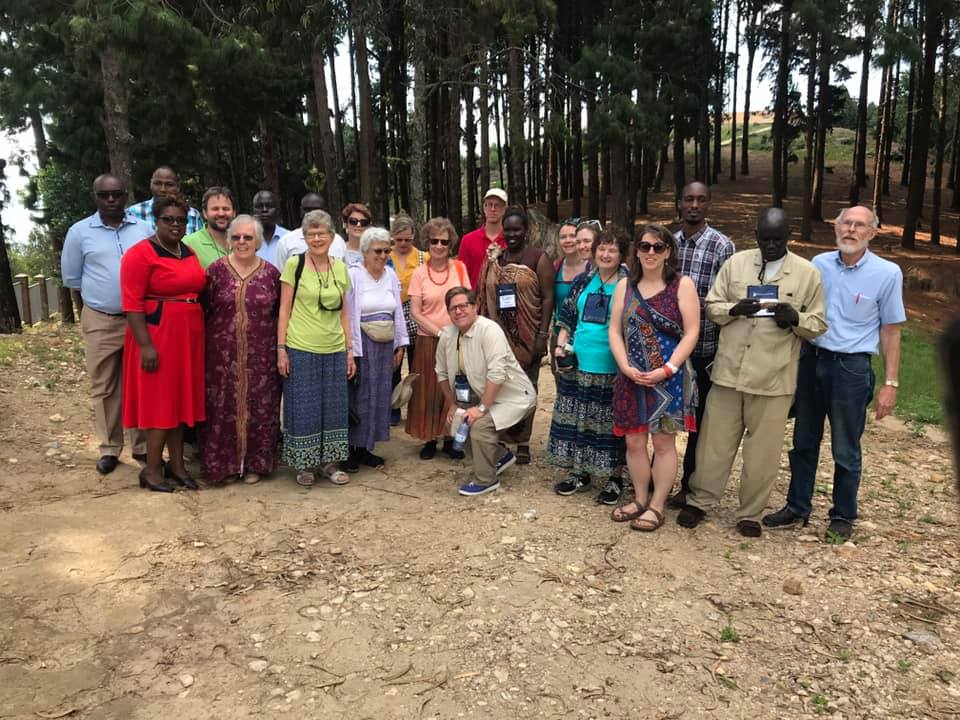 On an afternoon in April, I spent some time with Amber Slate, pastor at Aurora Presbyterian Church, talking about a conference in Rwanda this spring – a trip sponsored by PC(USA). It was a peacemaking travel seminar with emphasis on the reconciliation process in Rwanda.

She was in a group of about 20 individuals mainly from the United States, and others from Kenya, South Sudan, and Zambia. They spent most of their time in Kigali but also traveled to the southern part of the country where she was able to obtain a wider impression of the people and the countryside.

Some background information is important to establish the context of the conference. Rwanda is a landlocked country in central Africa with a population of over 12 million people. English, French, and Kiswahili are spoken by most of the native population. It is known as a Christian nation and in 1992, 60% of the population was Catholic and the rest were of the five major denominations. The Muslims make up a very small percentage in the country’s population.  Most of the citizens are involved in agriculture, although there is some mining and industrial activity.  Rwanda’s natural resources are limited. The population is composed of two groups, the Hutu majority and the Tutsis.

In 1994, a plane carrying the president was shot down and extremist Hutu militia launched a major offense and elements of the Rwanda military began a systematic massacre of Tutsis. Within 100 days around 800,000 Tutsis and moderate Hutus were killed; (contrast population of South Dakota at 858,000). There was a large group which fled the country, so that in total more than one million people were involved.

During the two-week seminar local Presbyterian staff met with them every morning to teach about peacemaking and the history of Rwanda. They also explored what they have learned theologically from their experience of the genocide and the rebuilding efforts following the event. One focus was for the participants to learn the peacemaking process so they could be more effective peacemakers in their own venue. No society is immune to those forces demanding violent changes.

Amber recounted that they were able to visit many Presbyterian churches and one of the powerful experiences was when they actually heard stories when people stood up and told what it was like to have been perpetrators of the genocide and then be forgiven by their victims. Other individuals who were victims talked about how scared they were to face people who had been involved. One woman told how really hard it was to forgive the man next to her who wanted reconciliation with her – he had killed her husband. She was able to forgive – a powerful experience, indeed. These dialogues continued in morning worship services as the perpetrators of genocide and the victims of genocide worshipped together. Out of this grew an organization called the Light Group, which became a club where the goal was community and forgiveness between individuals.

Unfortunately, a particularly horrifying aspect of the event was people gathered in churches thinking that it would be a safe place and it became a convenient site for the slaughter to continue.

The local President of the Presbyterian Church in his talk to the group urged participants to think about God who is making reconciliation a truly central work of the church. “It is a core part of the Christian identity that we confess when we have sinned and that we acknowledge that we need God’s forgiveness.”

It has been over 25 years since Rwanda had a cultural meltdown and is now slowly achieving some stability and modernization. There are multi-story buildings, lots of businesses and a fairly modern airport. When one leaves the city, individuals are still seen working in fields without any modern machinery. Everything is done by hand with people carrying their crops on their backs to market. Amber met with Presbyterian women who were preparing homemade crafts for economic development within families and communities.

Amber believes this is a very powerful lesson for everyone to share. We are not immune from those forces which can consume and destroy based on a particular ideology or merely pure hatred. The group certainly felt the weight of failure by the international community to respond to this event where approximately one million people died tragically. We need to keep before us the message of peace and reconciliation with those with whom we do not agree.

This piece was written for the June 2019 Cascades Presbytery newsletter, Omnibus.