In an increasingly interconnected world, never has hope seemed so close, and yet, for Paola M., so very far away. In 2020, the native Venezuelan received the devastating news that her father was diagnosed with a rare type of stomach cancer that required a high-risk surgery. Lacking the necessary financial resources, Paola turned to the internet to find humanitarian agencies that could help. Her search led her not just to any list of names but straight to the name that made all the difference: Gabriela Zavala.

“Gaby guided me by giving me some options, among them the option of immigrating to the United States, where I knew they could perform my father’s medical treatment,” said Paola.

Zavala, who is the founder and president of the Asylum Seeker Network of Support, is also director of its Resource Center Matamoros, a grassroots effort that has provided humanitarian aid to thousands of asylum seekers in Matamoros, Tamaulipas, Mexico, since 2019.

The seemingly tireless Zavala brings her passion on behalf of the marginalized along with her years of hands-on experience advocating for the vulnerable to the critical work she does every day at the border. Her experience served her well in advising Paola’s family on how to apply for a humanitarian visa. And although their eventual decision to seek entry into the U.S. was by no means an easy one, in the end, Paola saw it as their only possible choice. “Because my father wanted to live,” she said, “we were willing to do whatever was necessary.”

Today, in part because of a generous grant to Resource Center Matamoros from Presbyterian Disaster Assistance (PDA) through One Great Hour of Sharing, Paola, her father, Raul, and their extended family are “improving our quality of life and giving my father many more years of life.”

In many ways, Paola’s story is unusual in that her family’s crisis was resolved promptly while most of the people in Matamoros face long waits before entering the U.S. More often, even with the help of Resource Center Matamoros and other organizations, most are turned back. “It’s the ultimate fulfillment when you see a family like Paola’s come through and we’re able to process their application within a couple of days,” said Zavala.

The beginning of hope 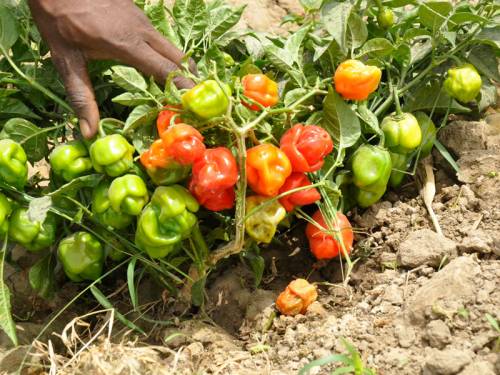 Gifts to the One Great Hour of Sharing Offering help communities receive seeds to plant and water pumps for irrigation. Courtesy of CISCOPE

Making hopeful outcomes possible has been the goal of One Great Hour of Sharing for more than 75 years. Founded in 1946 by Episcopal Bishop Henry Knox Sherrill, the offering, which became known in 1950 as One Great Hour of Sharing, has a storied history as an ecumenical endeavor. Although many aspects of the offering and its participants have changed since its founding, its original purpose of helping neighbors in need around the world remains the same, giving the PC(USA) a tangible way to share God’s love since Presbyterians first joined the effort in 1947.

“Interestingly enough, One Great Hour of Sharing was started in response to refugees coming out of Europe, although it’s used for other kinds of relief nowadays, such as hunger,” said Susan Krehbiel, PDA’s associate for refugees and asylum.

The three programs supported by One Great Hour of Sharing — Presbyterian Disaster Assistance, the Presbyterian Hunger Program (PHP) and Self-Development of People (SDOP) — all work in different ways to serve individuals and communities in need. From initial disaster response to ongoing community development, their work fits together to provide people with safety, sustenance and support.

Across the border from Matamoros in New Mexico, the Multicultural Alliance for a Safe Environment (MASE) partners with SDOP to effectively network and equip the Navajo (Diné) people who are directly impacted by environmental racism. Over 40 years a go, when an earthen dam on United Nuclear Corp.’s tailings disposal pond in Church Rock, New Mexico, ruptured, 1,000 tons of solid radioactive mill waste and 90 million gallons of acidic and radioactive liquids poured into the Rio Puerco. The contamination of the land, air and ground water immediately affected nine Navajo municipalities, known as Chapters, as well as Gallup, New Mexico, and communities as far away as Arizona. Every year on or close to July 16, the Diné people gather near the site to share their testimonies, punctuated by their tears and their pain.

Because the toxic effects of this human-caused disaster have impacted the Navajo people for generations — especially in the form of chronic health problems like asthma as well as a higher incidence of miscarriages, birth defects and cancer — the people mobilized for action in grassroots groups. MASE comprises five such groups. “MASE is an incredible attestation to the power of community organizing,” said the Rev. Dr. Alonzo Johnson, SDOP’s coordinator.

For Ruling Elder June L. Lorenzo, Laguna Pueblo/Navajo (Diné), her own engagement in MASE’s work deeply informs her service on various national bodies of the PC(USA), especially the Native American Advisory Committee, which focuses on the implementation of the General Assembly’s repudiation of the “Doctrine of Discovery.” Lorenzo is a member and clerk of session at Laguna United Presbyterian Church, the only Native American congregation in Santa Fe Presbytery.

The Doctrine of Discovery, which originated as a papal teaching, was used by European countries, and later by the U.S. in its westward expansion, to justify the colonization of other parts of the world. Large numbers of Native Americans in the U.S. lost their land, and their lives, as a result.

Lorenzo works closely with MASE’s coordinator, Susan Gordon, who herself has more than two decades of grassroots organizing experience with impacted community groups at the local, national and international levels. “What’s important in this work are the relationships — on the ground, in community, in grassroots groups,” said Gordon. “That’s where you see change happening and that’s where the leadership has to emerge if we truly want to change things.”

Help comes to the forgotten 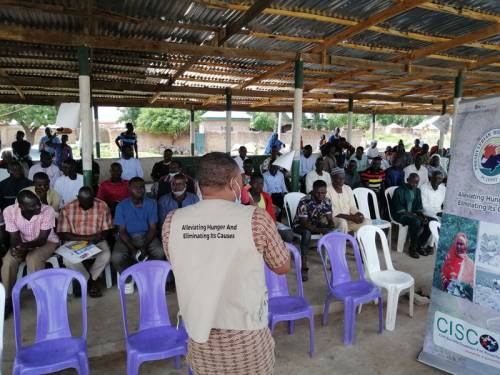 The Civil Society Coalition for Poverty Eradication helps Nigerians by acting as an agent of change. Courtesy of the Presbyterian Mission Agency

Thousands of miles across the Atlantic, Nigeria’s farmers are working to change their circumstances. “I do nothing more than farming, and my wife does petty trading so our family can eat,” said 52-year-old Ohel Swade, a full-time farmer with a family of six living in the agrarian Demsa community in northeastern Nigeria. “We live in a place where help never finds us.”

That is, until CISCOPE came on the scene. CISCOPE, the Civil Society Coalition for Poverty Eradication, serves Nigeria’s most vulnerable populations by acting as an agent of change and an influencer of the nation’s public policies and programs.

“Even though Nigeria is one of the wealthiest oil-producing countries in the world, our government is not strong, and the money doesn’t go where it needs to go, to the people,” said Peter Michael Egwudah, who is now in his 10th year as program coordinator for CISCOPE.

Valéry Nodem, associate for International Hunger Concerns with PHP, marvels at the way that Egwudah navigates Nigeria’s complicated systems toward improving its people’s quality of life. “People don’t realize how many skills it takes for Peter and the CISCOPE staff on the ground to do the work they do,” said Nodem, who was born in neighboring Cameroon and lived there until he began his work with the PC(USA) 10 years ago.

Another unique aspect of CISCOPE’s work is its focus on the country’s immediate needs while simultaneously attempting to address the underlying root causes. “The people need something right now, like food and seeds,” Egwudah said, “but we also need to get communities to a place where they can become agents of their own self development.”

Toward that end, CISCOPE organized 200 farmer households in 40 communities — including Swade’s family — into five-person groups. Each group of five received a water pump for irrigation farming, 10 kilograms of rice seedlings, as well as vegetable seedlings such as amaranth and okra, and agricultural training. Nodem said that CISCOPE’s philosophy is the embodiment of the Presbyterian Mission Agency’s Matthew 25 invitation.

“Working with CISCOPE has been really inspiring because not only are they right there with the people displaced by crisis in their time of critical need, but they are also looking at short, medium and long-term development, especially working toward the Matthew 25 goal of eradicating systemic poverty,” he said. And because of that, families like Swade’s can look forward to a better future.

“We now have a little bit of money to pay our children’s school fees and our medical bills,” he said. “We have hope.”

This was published for Presbyterians Today.