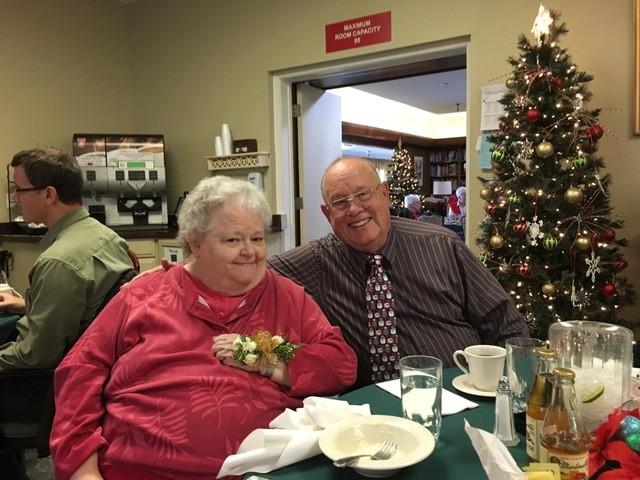 The Rev. Ken Tracy spent much of his more than 30 years in ministry in the Presbyterian Church (U.S.A.) helping congregations work through conflict and revitalize their membership.

“What I wanted to do was serve what I called ‘troubled churches’ — ones that had conflict within the congregation, lost membership or were hurting financially,” he said. “A number of churches, especially some of the smaller ones, were struggling with lost membership. I wanted to help.”

If you have the opportunity to talk with Tracy for even a few minutes, it’s easy to understand why he would be really good at tackling difficult conversations and helping others heal — he laughs easily and has an infectious personality that quickly draws you in.

“I was 35 years old when I decided to go to seminary to become ordained as a minister, so it was a second career for me,” he said. “When I found out Lancaster Theological Seminary had a spot for me, Carol and I packed up our two kids and our old cat, and we drove from Reno, Nevada, to Lancaster, Pennsylvania, in a U-Haul truck.”

That was in 1975. Now, 45 years later, he’s tripled his number of cats — cats he swears aren’t his — and is caring for his wife, who is in assisted living, with the help and support of the Board of Pensions.

Along the way, he’s built a legacy of love and faith by helping churches and presbyteries heal and grow — and his focus on ministry and service within the church all started not long after he met Carol in May 1965.

Building a legacy of love
In the early 1960s, the Rev. Tracy was SP4 Tracy. He was in Germany serving in the U.S. Army, assigned to guard the Berlin Wall as it was being built between East and West Berlin. He didn’t know that years later he would be tearing down walls, figuratively speaking, and rebuilding congregations.

“Carol was attending the University of Nevada,” Tracy said. “I’d grown up at St. John’s Presbyterian Church [in Reno], where they had a college-age group dinner every Sunday night because the university didn’t serve meals on Sundays. I’d just gotten out of the Army and went to the dinner. That’s where we met.”

“I began working in Nevada in lay ministries, and I served a small church about 250 miles from Reno,” he said. “I started going to presbytery meetings. I did that for a number of years, and I was on what they called back then the “MR Committee,” which is basically ministerial relations. I knew I wanted to do more to serve.”

That led him to Lancaster Theological Seminary and his first church.

“My first call was at the Pleasantville, Pennsylvania, Presbyterian Church,” he said. “At the time, they’d already had a visit with the MR Committee and were headed to administrative commission. I was there seven years and got it back to being healthy and helped get the children’s program, called church mice, going, and helped build a strong emphasis on mission.”

He then found a new challenge within Boulder Presbytery, now known the Presbytery of Plains and Peaks.

“We had a motor home at the time, so I packed up the kids, the wife and, of course, the old cat, and we drove out to Colorado,” he said. “There was a church under administrative commission, and the pastor was forced to retire. I gave the presbytery my resume and told Carol, ‘We’ll probably never hear from them again.’ But when we got back home, they contacted me. We moved out there, and I did what I was called to do — even today that church is healthy, the congregation is big on mission giving and members support the presbytery.”

Over the years, Tracy had similar successes. He served as the executive of the Presbytery of Utah for seven years, as the pastor at St. James Presbyterian Church in Tarzana, California, following the Northridge earthquake that damaged the sanctuary, and he led a congregation in the Alaskan village of Hydaburg — taking him, Carol, an old cat and one kitten to the smaller churches he loved to serve.

“The church was in a village of about 400 people,” he said. “We were hatching, matching, and dispatching. We had an active congregation of about 18 people. It was truly a mission church. There was no law enforcement; drugs and alcohol were a big issue with the natives, and there were only about half a dozen non-natives in the village. We’d planned to spend the rest of our lives there, but mission dollars dried up in 1995.”

So they found themselves in Petersburg, Alaska, where Tracy led a self-funded church until Carol got very sick.

“We made three trips to Seattle to see doctors, and the shared grants handled by the Board of Pensions picked up 100 percent of our expenses,” he said. “They paid for our flights, hotel, meals, rental car, whatever we needed.”

Turns out, Carol had allergic pneumonia. The manse where they lived in Alaska had black mold, and she was extremely allergic. They needed to move south, so they went to Idaho, where Tracy was called to work with small churches (10 to 20 people) and trained their lay people to lead worship.

But Carol did not do well with the altitude and her health issues grew worse, so they again turned for help to the Board of Pensions, which is funded in part by the Christmas Joy Offering. In 2009, the couple moved to Monte Vista Grove Homes, a Pasadena, California, retirement community for retired pastors, church workers and missionaries, this time with one old cat and two pugs.

“Turns out the black mold had affected two-thirds of Carol’s lungs. She now lives in skilled nursing, and I live in independent living. Her room is about 30 feet from mine,” Tracy explained. “I’d never heard of a shared grant until I was the executive at the Utah Presbytery and a member needed some support. I didn’t realize then that years later it would also help my family.”

The Board of Pensions now provides a monthly housing supplement to help with Carol’s nursing cost. Donations to the Christmas Joy Offering help support retired pastors like Tracy — making it possible for him to stay close to Carol … and their cats.

“My daughter Robin was visiting from Salt Lake City, and when our cat died, she found a red tabby she knew her mom would love, and his price was negotiable. When I asked what that meant, they said we’d get a deal if we also took his brother,” he said with a laugh. “So, Carol has Bugsy Malone and Richard Tracy. I also take care of April for a neighbor who had to go to skilled nursing. So there are three old cats here. I’ve got all these animals who tell me what to do, and I don’t own any of them.”

Give to the Christmas Joy Offering to help the Assistance Program of the Board of Pensions support our leaders: past, present and future.

This was published for Presbyterian News Service on December 15, 2020.