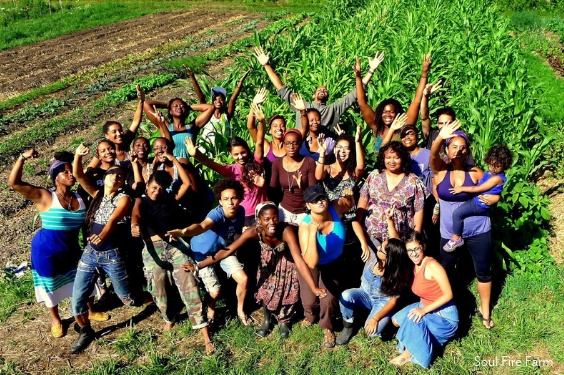 Making Food and Farming More Accessible to People of Color

As a college student, Lytisha Wyatt’s study about health inequalities in the United States caused her great concern.

She was especially troubled to see data that showed people of color die from illnesses linked to poor nutrition at a much higher rate than white people. Yet she was not at all surprised by this reality. People of color and people in lower-income communities are disproportionately impacted by a lack of access to healthier foods. “Nutritious food sources were not present in the community where I grew up, but they were in more affluent communities,” Wyatt said.

Wanting to address these inequalities, Wyatt, who was raised an urbanite in southeastern Massachusetts, took a class on urban agriculture and volunteered at an urban farm. Her interest in agriculture and food justice continued to grow and eventually led her to Soul Fire Farm in upstate New York, where she is now an assistant grower.

Soul Fire Farm raises and sells organically grown vegetables and eggs and sets prices based on the ability of customers to pay. Through education and advocacy, the farm also seeks to increase the number of people of color who are farm owners and/or managers.

One of its programs is a weeklong immersion program for black and Latinx farmers, training that Wyatt attended before joining Soul Fire’s staff. “I saw people who looked like me who were farming,” she said.

More than 1,000 people from across the U.S. attend training opportunities at Soul Fire Farm each year and go on to farm, run community gardens and/or advocate for a more just food system. Presbyterians, through their gifts to One Great Hour of Sharing, aid Soul Fire Farm’s efforts toward making the U.S. a country where everyone has access to nutritious food and to farming.

Leah Penniman, co-founder and co-director of Soul Fire Farm, said the country’s food system is fraught with racial inequity. “Approximately 85 percent of U.S. food is grown by Hispanic and Latinx people, but they only make up 3% of farm management,” she said. “On the consumer side, if you have dark skin, you are four times more likely to live in neighborhoods without a supermarket or farmers market. You are more likely to have diabetes, obesity and other diet-related diseases.”

Penniman said that discriminatory farm policies and societal racism have denied them and other people of color the land, credit and training necessary for successful farming.

Using One Great Hour of Sharing gifts, the Presbyterian Hunger Program partners with Soul Fire Farm as it nurtures a more diverse generation of food growers and provides better access to nutritious food. One food grower working with Soul Fire Farm is Nicole Dupre, who manages a community garden in the Bedford-Stuyvesant neighborhood of Brooklyn, New York.

Rapid gentrification has caused rents and other living expenses to soar in the community. The long-term residents, mostly people of color, struggle to make ends meet. The community garden helps low-income people keep their pantries filled and nurtures relationships by building a sense of community.

“By working together and growing food, nobody is left behind,” Dupre said. “You are part of something bigger.”

By giving to One Great Hour of Sharing, Presbyterians are also part of something bigger. Gifts to the offering help the Presbyterian Hunger Program, Self-Development of People, and Presbyterian Disaster Assistance engage in ministries that are building a more just world. Most congregations receive the offering on Palm Sunday or Easter Sunday.

This was originally published for Presbyterian News Service on April 8, 2019.