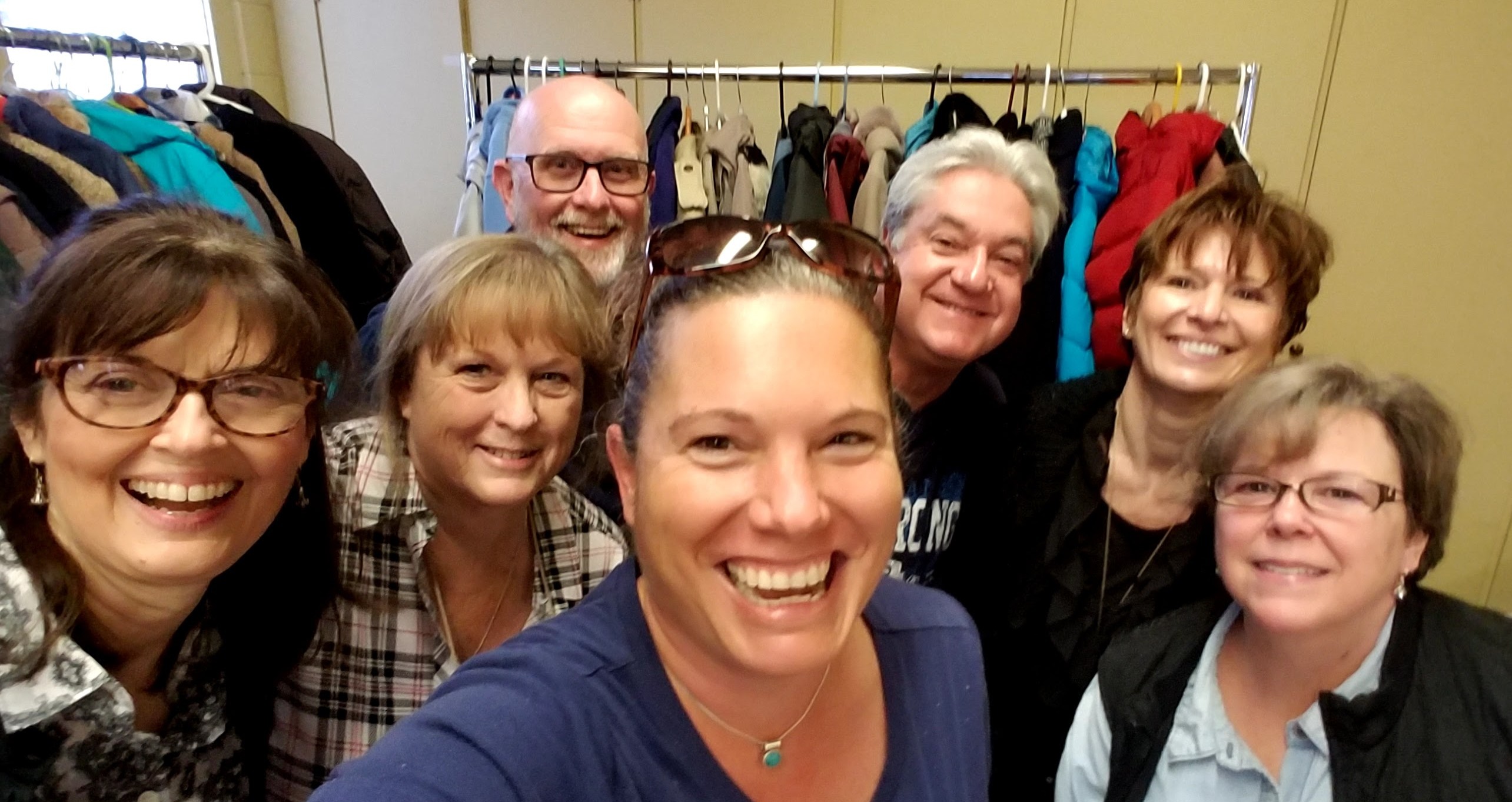 A light in the clearing

When the prophet Elijah, deep in the throes of an existential crisis, fled to Mount Horeb in search of God, he was met instead with the sound of sheer silence.

“There was a time in my life where I was on the bottom,” Pisarcik would later testify during Sunday worship in her home congregation, First Presbyterian Church of Boonton, New Jersey. “I cannot even describe how hard and difficult that time was. Only those who have been there know how it feels.”

No stranger to the biblical prophet’s uncharacteristic death wish, the Boonton native said she had fallen into such a deep depression in her early 20s that she, too, asked to die. In fact, she attempted suicide.

“On that fateful day,” Pisarcik wrote in her testimony, which was later published as an entry in the congregation’s 2020 Lenten devotional, “I went for a walk in a wooded area where I kept repeating over and over in my wounded brain how I would end the pain. As I walked, I came across a field, which oddly seemed to call to me. I walked over to it, and as I walked into the field, a beam of warm sunlight hit my face. It was at this exact moment that I realized I had a made a terrible mistake: the terrible mistake of wanting to end it all. I then fell to my knees, sobbing and begging God for forgiveness of what I had done. Forgiveness, of which, I did receive.”

Pisarcik’s courageous profession never fails to move the church’s pastor, the Rev. Jen Van Zandt, whenever she rereads it.

“Who knows how many lives her story will save,” she said.

Van Zandt describes the church as “an amazing, diverse, creative, super cool congregation.” In February, she celebrated the 14th anniversary of her ordination and is still in her first call. “That says everything about what this community is like,” she said.

The fact that First Presbyterian’s worship services are “creative and not particularly ‘high church,’” was in part what appealed to Pisarcik, who was raised Roman Catholic. She was introduced to the congregation through her late grandmother, a lifelong member who loved music and sang in the choir.

Pisarcik — who was initially hesitant to affiliate with any church, not being what she considers a “churchy” person — found the congregation to be so open and welcoming that she became a member in 2012. Pisarcik was ordained a deacon a few years later.

And moreover, because Pisarcik’s watershed experience during college has taken on such a renewed resonance during the pandemic, she found herself compelled to address the growing mental health crisis not only by sharing her story with her church, but also by getting herself and the congregation more involved.

“Sadly, and tragically, our community has lost more people to suicide in 2020 than it has to COVID-19,” said Pisarcik.

In addition, according to Van Zandt, “Suicides have been increasing in general due to the challenges that the past … months have created for so many of us.”

“And since it has historically been an undiscussable,” she added, “we have to figure out how to have these conversations especially with our own youth in the light of what’s happening in our community.”

Among the first to step up in response to what was already a community crisis prior to the pandemic, the church’s board of deacons, on which Pisarcik was serving at the time, took immediate action to address the suicide crisis.

Because deacons in the Presbyterian tradition are called to a ministry of “compassion, witness, and service,” the board voted for the last three years to designate the church’s 25% share of the PC(USA)’s Peace & Global Witness Offering to support the New Jersey Chapter of the American Foundation for Suicide Prevention (AFSP), an organization in which Pisarcik had participated for years. 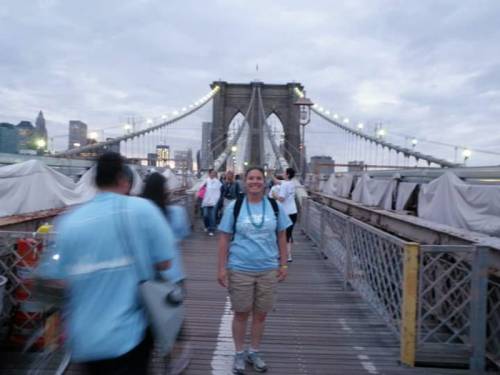 Natalie Pisarcik of First Presbyterian Church of Boonton, New Jersey, regularly participates in Out of the Darkness Overnight Walks, including this one in New York City about 10 years ago. (Contributed photo)

“I regularly took part in their ‘Out of the Darkness Overnight Walks’ and shared their excellent information,” she said. “The deacons’ hope in choosing this organization was that we might spread peacemaking of not just our physical selves, but our mental selves as well.”

Across the U.S. and around the world, the Peace & Global Witness Offering supports empowering ministries that work for reconciliation and facilitate healing. Half of the Peace & Global Witness Offering goes to the national church to address these issues around the world, 25% is retained by congregations for local peace and reconciliation work, and 25% goes to mid councils for similar ministries on the regional level.

Through the Peace & Global Witness Offering, congregations are encouraged and equipped to find and address the anxiety and discord that is prevalent throughout this broken and sinful world, just as First Presbyterian Church of Boonton, New Jersey has done.

“Because I’ve done a number of funerals where it was a death by suicide,” said Van Zandt, who recently officiated at a family member’s funeral, “I feel so strongly about proclaiming that there is no shame and no judgment from God. That person has been sent into the arms of the loving Savior. They are free from their pain. They are free from what kept them from living a happy life.”

To support congregations and individuals facing the devastating impact of suicide, the Presbyterian Peacemaking Program offers several webinars and publications, including the Companion Guide to the Commitment to Peacemaking — specifically the section on “Violence in Families and Communities,” which lists multiple resources related to suicide — and the PC(USA) Policy, Comfort My People: A Policy Statement on Serious Mental Illness, approved by the 218th General Assembly (2008).

“The peacemaking efforts made by the deacons spread into all the corners of the congregation’s life, from the Loaves and Fishes Food Pantry to the educational programs for all ages,” said the Revs. Sherm and Lorrie Rowland Skinner, parish associates at First Presbyterian. “As a result, Second Sunday, our adult discussion group, followed up in their planning for the year with a program on suicide prevention. AFSP responded by sending a volunteer speaker on ‘Talk Saves Lives,’ covering some of our requested topics such as recognizing the signs, what to say in the aftermath, giving hope, how to find meaning in one’s life, the situation with opioids and helping families with addiction.”

The Skinners said that one of the primary things the speaker dealt with was having an honest conversation, “pointing out that if you are worried about someone, assume you are the only one who will reach out.” He suggested a set of guidelines, which although familiar to most people, bear repeating: (1) talk to the person in private, (2) listen to their story, (3) avoid debating or giving advice, (4) know it’s OK to ask them directly about suicide, and (5) encourage them to seek help. 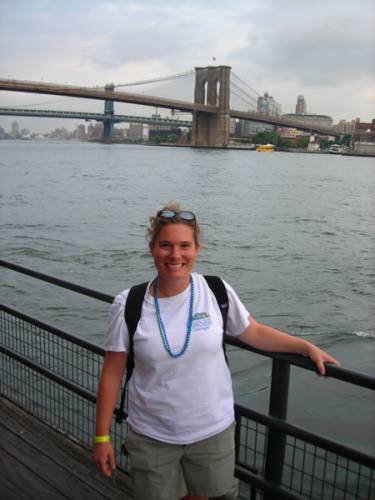 Natalie Pisarcik participates in an Out of the Darkness walk about 15 years ago. (Contributed photo)

“One of the great things about the way our Peace & Global Witness Offering is structured is that it allows congregations to identify a need and respond to it,” said the Rev. Carl Horton, coordinator of the Presbyterian Peacemaking Program. “There can be no doubt that violence prevention in all its forms is the work of peacemaking.  And the epidemic of suicide in our country, exacerbated by the COVID-19 pandemic, is of special and immediate concern. Boonton recognized a national problem that was being experienced locally and partnered with a reputable community provider to meet that need.

“Stories like this one demonstrate for me the amazing breadth of expression of peacemaking in the Presbyterian Church (U.S.A.), and they remind me that this offering is so wonderful because each congregation gets to discern the focus of its peacemaking work and witness. Some will try a new thing, while others will stick with time-honored commitments. When you put it all together, PC(USA) is doing some amazing peacemaking work in our world today.”

And the work is in no way over.

“That moment when I walked out into the woods was a turning point for me,” said Pisarcik. “I had reached my breaking point and was willing to end my life. Behind the campus there was a random clearing, where the sun hit me. It was like God was saying to me, ‘What are you doing? You have a reason to live.’ I was so overcome.” 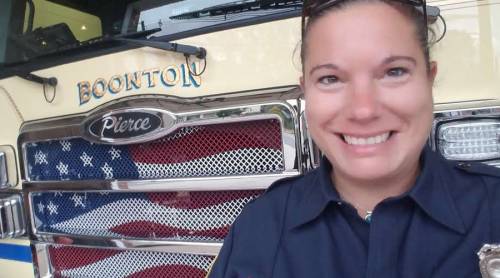 In addition to her day job, Natalie Pisarcik is a volunteer firefighter in Boonton, New Jersey. (Contributed photo)

Now a pillar of the community, Pisarcik, the industrial pretreatment coordinator for the Rockaway Valley Regional Sewerage Authority and volunteer firefighter, wishes she could say that her life has been perfect since that fateful moment in the woods.

“It has not,” she said, “but I am now a stronger person. That experience made me a believer. So listen and look for the light, and remember that you have a purpose, too. God is with you.”

Give to the Peace & Global Witness Offering to continue the valuable ministry of the Peacemaking Program.

This was published for Presbyterian News Service on September 7, 2021.