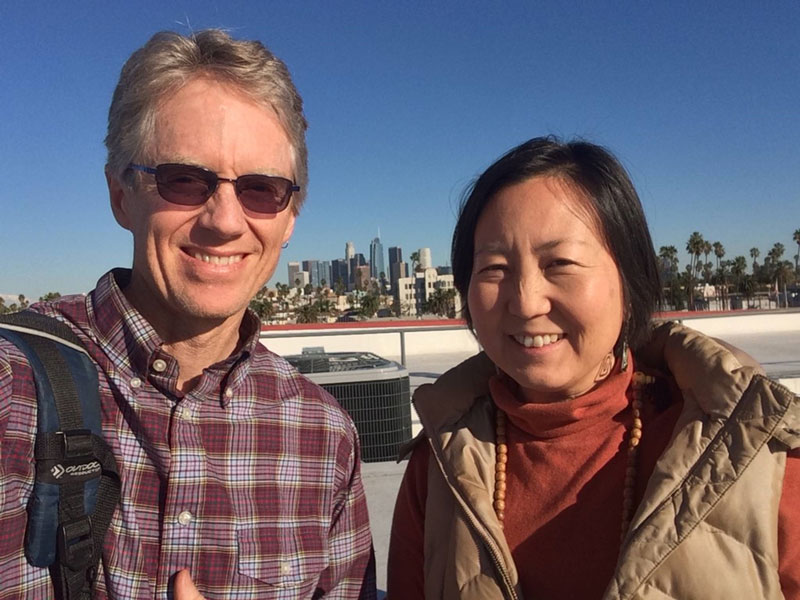 From fighting against wage theft to pushing for more affordable housing, the Koreatown Immigrant Workers Alliance has made its mark by challenging injustice in their southern California enclave since 1992.

The alliance, also known as KIWA, is on the frontlines in Koreatown, bringing about change for low-wage workers and other vulnerable community members in the Los Angeles area.

“KIWA is an inspiration,” said Andrew Kang Bartlett, associate for National Hunger Concerns for the

Presbyterian Hunger Program (PHP). “Not only do they educate and organize fellow Korean and Latinx workers to stand up for their rights, they address pressing needs in Koreatown around housing, development and community planning.”

KIWA’s advocacy work has led to better pay and working conditions at markets and restaurants in Koreatown and elsewhere in Los Angeles.

The nonprofit also co-developed a 52-unit affordable housing complex, Casa Yonde, in Koreatown in 2014, and continues to provide supportive services for tenants, who include formerly homeless individuals and families. Some former foster youths, people with mental health issues and survivors of domestic violence and sexual assault also may reside there.

As an organization working on many levels, “we do the range from maybe helping a tenant to apply for a job or to figure out how they can get support for mental health services — or whatever they may need as individuals — all the way to working on statewide affordable housing policy,” said KIWA’s executive director, Alexandra Suh.

Kang Bartlett praised KIWA for being a lead advocate for increasing the minimum wage to $15 an hour, a change that’s being implemented gradually in the Los Angeles area and other parts of the state.

KIWA is “a powerful engine for positive change and that’s why the Presbyterian Hunger Program has maintained our relationship with and support for them over many years,” Kang Bartlett said.

The Hunger Program has been able to provide long-term support of groups like KIWA because of gifts to One Great Hour of Sharing, an offering that brings safety, sustenance and hope to individuals and communities in need.

“The Hunger Program grant has been consistent now for almost 20 years annually,” said the Rev. Heidi Worthen Gamble, a PHP Hunger Action Advocate in the Presbytery of the Pacific. “The Hunger Program really came in to help support KIWA when it was very young and has helped it become stable and grow and develop its mission through the years and its strength.”

Suh said the funding has been “immensely important” in a material sense but also as a form of moral support as KIWA has worked on various issues.

The consistent funding from PHP is “a shining reminder of why we do this work,” Suh said.

Both KIWA and PHP strive to address the root causes of hunger, one of the reasons the minimum wage hike victory was so important.

“Los Angeles is such an expensive place to live, and the minimum wage is still not nearly enough,” Suh said. “But it gives people a little bit more to be able to survive and to be able to address food insecurity and even housing insecurity.”

Along with pushing for the hike, KIWA does outreach to make sure employers are notifying workers about the increase, said Bethany Leal, KIWA’s development director. “Every now and then, somebody will say, ‘Oh, I didn’t know the minimum wage went up’ because their employer’s just not telling them.”

Many of the people that KIWA serves are immigrant workers who “don’t have a strong command of English and don’t know their rights in this country as workers and so they get taken advantage of,” Gamble said. “KIWA formed to educate workers about their rights but also to help them learn how to fight for their rights,” including how to approach a boss.

As the alliance continues to work to achieve gains for workers and residents of Koreatown and beyond, it’s hoping to engage more people in KIWA’s efforts to make transformational systemic change.

“I would love it if we could have a stronger relationship with specific presbyteries in the area, and that is one thing that we look forward to building more mindfully in the future,” Suh said.

Meanwhile, the alliance appreciates that PHP understands the way the organization works and that change doesn’t tend to happen overnight, Leal said.

The Hunger Program knows “as well as we do the importance of the one-to-one conversations with people and convincing them that they are in fact powerful in their own sense and together they can make demands or make change,” she said. “That affects a person at a really deep level … and it’s not easy.”

This was originally published for Presbyterian News Service on December 11, 2019.