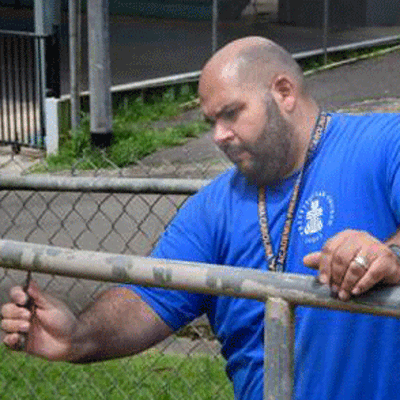 While the misery and devastation millions of Ukrainians are facing currently dominate the headlines, broadcasts and many podcasts, the Rev. Edwin González-Castillo, who coordinates Presbyterian Disaster Assistance response in Latin America and the Caribbean, continues to see the long-term effects of natural disasters and the spike in refugees that’s resulted.

“Just because you don’t see it in the news,” he told Dr. Bill McConnell and guest host Lynne Foreman during Monday’s Between Two Pulpits broadcast, “doesn’t mean it’s not happening.”

“Disasters have been going on forever, and they’ve been increasing over the last few years,” González-Castillo said. “It’s becoming a big challenge for our communities and siblings in Latin America and the Caribbean, having to deal with all the situations going on — on top of the pandemic.”

He labels the work PDA does alongside its partners “cracks of hope, bringing some hope and some love to communities facing these situations.”

In places like Haiti, poverty levels have been made even more dire by several rounds of earthquakes and recent bouts of social unrest and kidnappings. “Even our partners have had challenges,” González-Castillo said, calling the aid process in Haiti “slower than in other places.” Even providing the basics — food, water, blankets and medicine — “are long-term projects” that will be ongoing for months and even years. Through offerings including One Great Hour of Sharing, “many people have continued to support the work of PDA in Haiti,” he said.

“Even after everyone else is gone, we’re still offering ways to assist the communities,” he said. “There are so many refugee situations, and they’ve increased with the number of natural disasters.”

“It’s not just politics and wars that make people have to leave their country,” he said. To make matters more complicated, “they can’t say, ‘I want to escape because I don’t have the crops I had before.’ They cannot use food security as a reason they are a refugee, but it is one of the main reasons right now.”

McConnell asked González-Castillo, who served in parish ministry for a decade before joining PDA’s national staff, which scripture passage he’d select from the lectionary if he were filling a pulpit Sunday. Without hesitation, González-Castillo chose Luke 15:11-32, Jesus’ parable of the prodigal and his brother.

González-Castillo said over the years he’s preached about the prodigal, his brother, the father — even the servant, “who’s basically a snitch.”

“When I look into the text, I look at the reaction of the brother and compare that to the way we sometimes want to create criteria to decide who deserves the help, who deserves to be seen. It’s sad,” he said. “As a society, we have become that brother. We decide [the prodigal] doesn’t deserve the help.” One example: in Cuba, “because of the political situation, people have decided Cuba doesn’t deserve the help,” he said. “But PDA has worked with the Presbyterian-Reformed Church in Cuba and other partners in Cuba because the people continue to have needs no matter the political situation that’s going on there.”

“In many situations,” González-Castillo said, “we see people trying to decide who can benefit by the grace of God.”

Sometimes we see ourselves as the prodigal son in the parable, he said, while at other times we may find ourselves more like the father or even the brother. “We need to confront ourselves with that a little bit,” González-Castillo said. “We are in a good place, and we don’t get to decide who God will bless with help.”

“What matters is that we are here to help,” he added, “and God has provided the resources for us to help.”

“I was taking hold of everything you said. I wish we had more time,” Foreman told González-Castillo before wrapping up the conversation with the traditional final Between Two Pulpits question: “What is your hope for the future of the Church?”

“I have been a Presbyterian since I was five years old. I love this church and I love the work we have done,” González-Castillo replied. “I have moments when I am even more in love and moments when I question the work. We all experience that. My hope is that we will continue to strive toward God’s plan.”

González-Castillo said he once heard a preacher say that sometimes the church is going down one path while God’s going down another.

Disasters continue to befall all parts of the world, McConnell noted, with Ukraine the current and most tragic development. He invited Presbyterians to participate in the Lifting Up Ukraine webinar set for noon Eastern Time on Wednesday. It’ll be broadcast via the PC(USA)’s Facebook page.

“It’s a never-ending process,” McConnell said of the current array of disaster responses. “How can we assist and be Christ’s hands and feet as they try to survive and as our partners work to serve them and be Christ’s messenger to them?”

“If we’re all praying, acting and giving,” McConnell said, “then we are all participating in God’s mission for us.”

This was published for Presbyterian News Service on March 21, 2022.