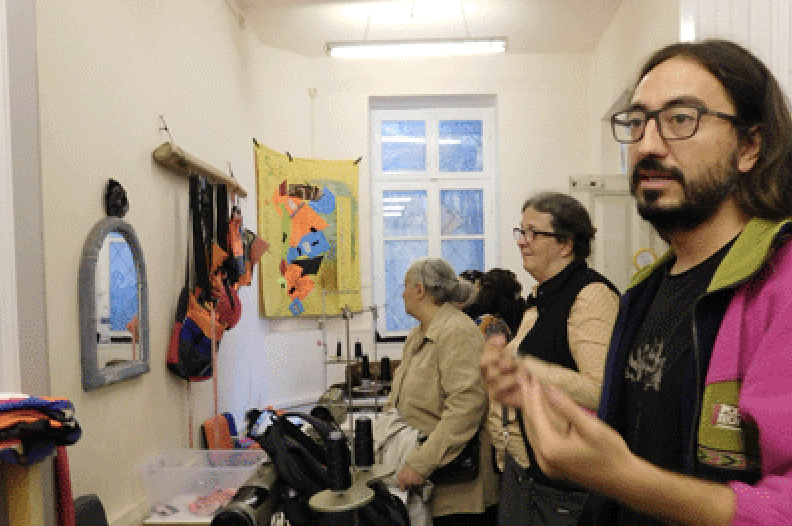 Wandering the streets of Athens with two small children in tow, Fatima had nowhere to turn.

Left homeless following a massive fire that closed the Moria Refugee Camp in 2020, the native Afghani was arrested and imprisoned after unknowingly becoming involved with drug dealers.

Devastated and alone in a Greek prison — her two little ones sent off to a shelter for unaccompanied children ­— Fatima may as well have been invisible, until her case was supported by a refugees legal aid organization, which referred her cause to Lesvos Solidarity.

Members of the migrant justice organization based on Lesvos Island, Greece, heard her story and sought to restore her human dignity.

“Injustice must not become invisible,” said Efi Latsoudi, one of the founders of Lesvos Solidarity. “The migration crisis in Southern Europe and what is happening in Greek society are all connected to the worldwide narrative. If refugees are seen as a threat coming to invade your country, then people don’t see their human face. People are afraid, and ultimately, we fear the stranger.”

Wholly dedicated to the work of peacemaking, Lesvos Solidarity, a PC(USA) global partner, runs educational, psychosocial and medical programs for refugees as well as a strong advocacy program for refugees’ rights. Registered in 2016 as an official nongovernmental organization, Lesvos Solidarity works to bring people together — refugees, locals and global citizens — to understand their shared humanity.

“It’s not for [refugees] only, but also for us,” said Latsoudi. “We need to feel that the person next to us has access to rights and to dignity, because otherwise how could we continue our life? What our work is trying to highlight is not that we are supporting refugees because we feel pity for them, but that these are human beings who need to have access to human rights and basic support.”

In its singular mission to advocate for a more just society, Lesvos Solidarity embodies the aims of the Peace & Global Witness Offering, which encourages the church to cast off anxiety, fear, discord and division, and embrace God’s mission of reconciliation.

The annual Offering, which is traditionally received on World Communion Sunday, Oct. 2 this year, is unique in that half of it is directed to efforts at the national church level for peacemaking and global witness work around the world, while 25% is retained by congregations for local peace and reconciliation work, and 25% goes to mid councils for similar ministries on the regional level. 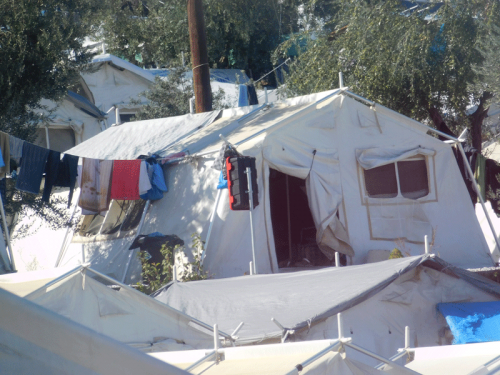 “Lesvos Solidarity is a living example of how a migrant justice organization can show love to the stranger and promote dignity among those who flee war and poverty,” said Luciano Kovacs, area coordinator, Middle East and Europe for Presbyterian World Mission. “Their program provides both emergency relief and long-term support to vulnerable people who have had to choose to leave their homes and countries to find a better life elsewhere. Helping those who leave war-infested areas is a peacemaking act.”

To undergird the organization’s political advocacy for social transformation, Lesvos Solidarity also creates opportunities for migrants and refugees to be trained in skills that will benefit their new lives in Greece and Europe.

“Helping people to integrate into society is an important part of the work that Lesvos Solidarity does, including being a connector with the larger society,” Kovacs said. “Promoting migrant justice on Lesvos, in Greece and in the European Union is essential to change policies that prevent migrants from becoming full citizens.”

In Fatima’s case, the organization collaborated with human rights lawyers and others to secure her release from prison, provide her with housing close to her children and help her find employment.

“Because she worked very hard in prison learning Greek and English, she’s been doing amazing things to support other young women,” said Latsoudi. “She understands how vulnerable you are when you are living on the streets, have no house and have no way to make money. To survive, you can easily become a victim of criminal groups. Her story helps us to see that people have a lot of potential and that we need to support them to make their way.”

Sadly, Fatima’s situation — and the refugee crisis on Lesvos — is nothing new.

Because of its location off the coast of Turkey, the island has long served as a crossing point to Europe for migrants fleeing from Syria, Afghanistan, Iraq, Iran, Somalia, Eritrea and other African countries. The number of arrivals has decreased significantly in recent years due to systematic pushbacks by the Greek government, which is returning people to Turkey or is simply stopping them from coming.

“For me, because we are talking about peacemaking work, I see a kind of undeclared war at the border,” Latsoudi said. “It’s a very militarized border where there’s a lot of tension and many people die. Not long ago, several bodies of mostly African people were found in Lesvos. The family members from Somalia and Ethiopia who were able to come had to do the identification, funerals and transfer of the bodies to the country of origin. It was very hard.”

Latsoudi said that witnessing to human rights violations is a critical part of her organization’s mission.

“You simply cannot have a society that tolerates the death of other people; that believes their lives are unimportant and they deserve to die,” she said, “This is very dangerous.”

For those who do get through safely and are granted asylum in Lesvos, the organization provides a variety of support services, many of which are intentionally designed to bring refugees and locals together. This model not only allows those fleeing persecution to help restart their lives, but it also gives local residents much-needed financial support.

“When I visited Mosaik in Mytilene in 2019, I was struck by the holistic approach they use to make migrants feel welcome and provide much-needed services that cover both physical, spiritual, cultural and connectional aspects of people’s lives,” Kovacs said.

Mosaik also created an upcycling workshop to inspire creativity, promote recycling of the thousands of life jackets that were abandoned on the shores of Lesvos, and process discarded materials.

“We use the brand name ‘Safe Passage’ because we want to send a message that people need to come the safe way, not die in the sea,” said Latsoudi.

By contributing to the Peace & Global Witness Offering and learning more about the partner organizations it supports like Lesvos Solidarity, Kovacs said that Presbyterians have an opportunity to help change narratives in the U.S. about migration.

“Christian principles not only demand that we offer hospitality to the stranger, but that we change the way human beings are seen, especially those who are suffering because of economic injustice and violence,” he said, evoking the PC(USA)’s call to be a Matthew 25 Church.

For Latsoudi, it all comes back to witnessing.

“The most important thing for me is not to close the eyes,” she said. “As hard, uncomfortable and painful as it sounds, we need to be aware of what is happening in this world and to stand in solidarity in any way that we can. We also need to create connection, because what is happening in the U.S. and at the Greek border and in other places is all connected. Sometimes when all we feel is the distance and how small we are, it’s hard to feel the connection. But when we become aware, we see that we are not so small and that there are miracles happening everywhere.”

The work of the Presbyterian Peacemaking Program is made possible by gifts to the Peace & Global Witness Offering.