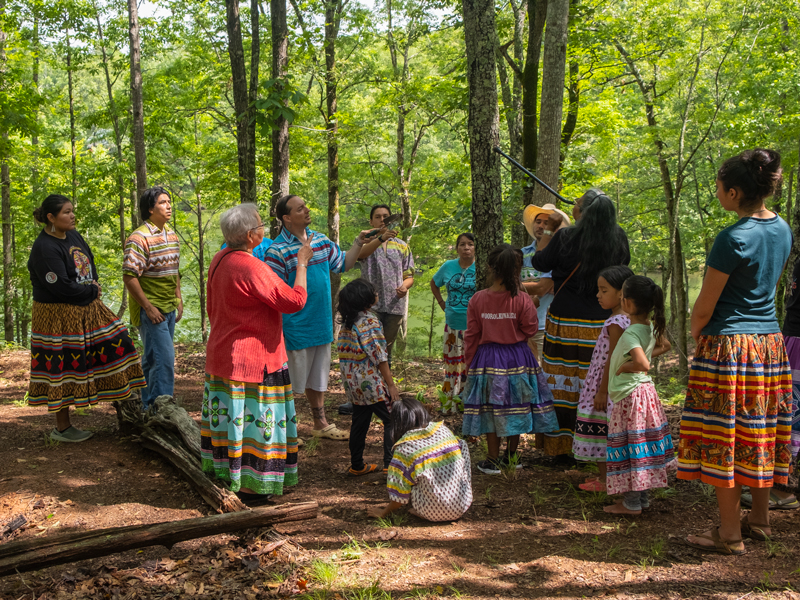 Nearly two centuries after many of their ancestors were displaced from their native homelands in the southern United States, a group of Native Americans is preserving their language and traditions in a unique community in Alabama.

The Ekvn-Yefolecv Indigenous Maskoke Ecovillage was established in 2018 by Maskoke people who wanted to return to their roots and an agrarian way of life.

“We’re committed to this place because we are in service to the land, to the place that we come from,” said Tawna Little, the partner of Ecovillage co-founder Marcus Briggs-Cloud. “Our people were from here. Our people had ceremony here. These trees that are here heard our people … speak our language.”

The Ecovillage is located in Weogufka, Alabama, about an hour south of Birmingham in a region that was inhabited by Maskoke before its people were scattered to other parts of North America during the country’s early history.

“Our people were forcibly removed from our homelands here in 1836,” Briggs-Cloud explained during last year’s COVID at the Margins series by the Presbyterian Church (U.S.A). “Most of our folks were sent westward to what’s now commonly colonially known as Oklahoma, and some of our folks were sent southward to Florida and some to the Alabama-Florida border.”

About a dozen people live at the Ecovillage full-time and others stay part-time in the community whose name means “returning to the Earth” or “returning to our homelands.”

Little is from Oklahoma, where her great-grandmother Effie Lena maintained a camp house at Hilltop Indian Presbyterian Church in Wewoka.

“We’re from a diaspora of Maskoke people,” Little said. The residents are “like-minded” people with a commitment to making “drastic change to save the language,” which requires reconnecting with the land and immersing the children in the indigenous language, which is taught by their elders, she said.

Briggs-Cloud realized many years ago that the language was endangered due to few remaining speakers and that “language immersion methodology was going to be the only pathway to keep our language alive.”

But that takes more than just creating a language school, he said. “It’s that we have to be embodying these traditional values to which we say we subscribe.”

Ekvn-Yefolecv (pronounced “ee-gun-yee-full-lee-juh”) lies on 1,206 acres of property that was purchased with funds from individuals, foundations and religious groups.

“While there is surely irony around the need to purchase ancestral land, it is wonderful that people in Alabama and around the country rallied to support the repossessing of the land their ancestors had stewarded over centuries,” said Andrew Kang Bartlett, National Associate for the Presbyterian Hunger Program, a funding partner. “PHP is thrilled to be a small part of this growing national movement to get land back to its original caretakers.”

In the income-sharing community, where there is an emphasis on natural building construction, renewable energy and low-tech integrated regenerative systems, each person in exchange for their labor receives a $400 stipend and lodging and food, Briggs-Cloud said.

“We are building small, 400-square-foot tiny homes with timber framing, strawbale walls, earthen plasters for floors and walls, and living roofs,” he said.

Other ecofriendly practices include doing rainwater catchment, creating an aquaponic system, and using composting toilets and biodigesters as part of the community’s goal to live in a healthy way and be good stewards of the Earth.

“The traditional ecological practices used by the Maskoke and other Indigenous peoples are greatly needed to adapt to a changing climate where uncontrollable fires have become commonplace,” Kang Bartlett said.  “Last year, Ekvn-Yefolecv did a prescribed burn on a portion of their land, employing this time-honored strategy for increasing biological diversity and preventing too much burnable material to accumulate. These practices have global applications.”

Farming, fishing and foraging also are part of life at the Ecovillage, where things like cucumbers, squash, tomatoes and herbs are grown.

The community welcomed four bison in 2019 and has released sturgeon, a sacred fish to the Maskoke, back into the watershed. “We did go to Canada to get the eggs and hatch them out here,” Little said. 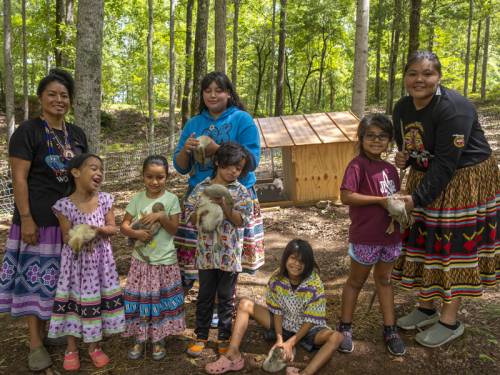 The Maskoke people are reconnecting with the land and immersing the children in the indigenous language at the Ecovillage. (Photo courtesy of Ekvn-Yefolecv)

With the help of her two children, one of Little’s main jobs is tending to about 100 chickens and nine ducks. Residents also practice cultural arts, such as basket weaving and the sewing of traditional clothing.

The Presbyterian Committee on the Self-Development of People (SDOP) is one of the community’s funding partners.

“SDOP believes that Ekvn-Yefolecv is an organization that is illustrative of the concept of self-determination,” said Rev. Dr. Alonzo Johnson, SDOP coordinator. “Their collective, communal approach to environmental sustainability is clearly a model for the way the church can advocate for these issues.

“SDOP also recognizes that Ekvn-Yefolecv’s voice of advocacy and care is wholistic, prophetic and powerful,” Johnson continued. “We, the church, can learn from their Indigenous wisdom about the ways that we can envision a fuller picture of justice as well as fight against paternalism and colonization.”

PHP and SDOP are part of the Compassion, Peace and Justice ministries of the Presbyterian Mission Agency. They are supported by your gifts to One Great Hour of Sharing.

This was published for Presbyterian News Service on March 4, 2021.