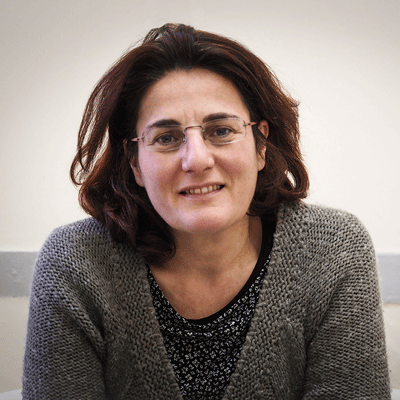 More than 15 years ago, Efi Latsoudi moved from Athens, Greece, to Lesvos Island when she realized “there are refugees suffering and local society didn’t know much about it. No one was taking care of them. I wanted to know what was happening to them.” She founded Lesvos Solidarity, an organization that serves refugees and others and is supported in part by gifts to the Peace & Global Witness Offering, which many Presbyterian Church (U.S.A.) congregations received Sunday as part of World Communion Sunday.

The care Lesvos Solidarity has offered included Pikpa Camp, which housed an estimated 30,000 refugees beginning in 2012 until the Greek government shut it down two years ago.

“Solidarity taught me to stand next to people, to stand for their rights,” Latsoudi told Dr. William McConnell, acting director of Special Offerings, during the “Between Two Pulpits” broadcast Monday, which can be viewed here. “That’s how we created this open, self-organized welcoming place … People said it wasn’t possible, but that’s how we started it, and it went on for eight years. It connected a lot of people and supported thousands.”

The camp welcomed and served people fleeing conflict in Syria and other nations in turmoil, including Iraq and Iran and African countries. Although its capacity was 200 or so, Latsoudi said by 2016 Lesvos Solidarity was serving about 700 people every week at Pikpa. Nearly twice that number were being served at the Moria Refugee Camp, which burned in 2020.

“It was in the center of the city. Everyone wanted to go there, and it was a place for all,” Latsoudi said of the Pikpa Camp. Despite the shutdown and the fire, the work continues, Latsoudi said, with a focus on refugee conditions and the deprivation of their human rights. Vocational training as well as technology lessons continue, as does one of the practices that made headlines for Lesvos Solidarity: fashioning bags out of the life jackets refugees wore on their voyage to Lesvos.

“We have tried to go against the current. The current is the deprivation of rights and the big camps that deprive people of any dignity, the idea that ‘these people should be far from us,’” Latsoudi said. “You can’t categorize people and you can’t exclude anyone.”

McConnell wondered: “What gives you hope?”

“What gives me hope is the people,” Latsoudi said. “The refugees themselves, the people I am working with and the support of others. It gives me hope that we can fight together from wherever we are. That connection gives me lots of hope,” even though “seeing all this pain and suffering, sometimes we have been more desperate than the refugees.”

Asked by McConnell if there was anything else “you want us to hear,” Latsoudi said there is “a lot of life that comes from people supporting and being aware of what is happening in Lesvos.” While “we are fighting something big and sometimes dark, Lesovs is a symbol because of solidarity. We have to continue with this, especially this peace work, which brings people together. That’s the most hopeful thing.”

Drawing from Isaiah 55, McConnell offered up a prayer that included these words: “God of all compassion, thank you for the work of Lesvos Solidarity. Thank you for Efi’s work, and for all those who work to bring together refugees and the people of the island of Lesvos to build community and support and to bring your peace. Thank you for leading us out in joy and peace. May we see the mountains and the hills singing and the trees clapping their hands as your people work together to bring about peace. Amen.”