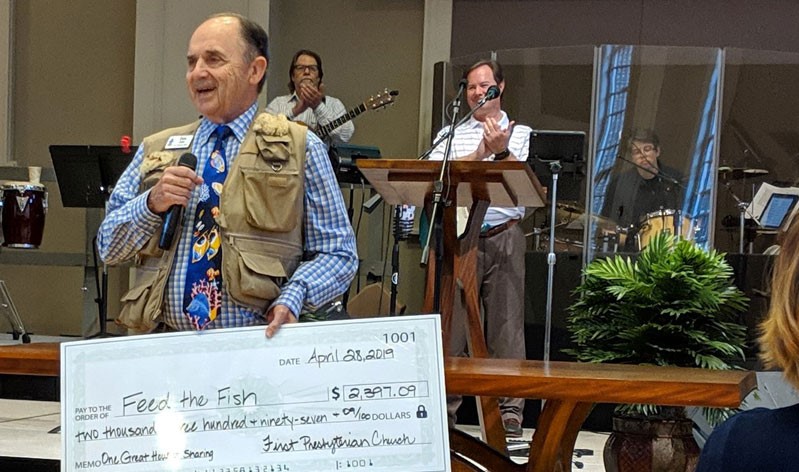 On Easter Sunday, 1949, four years after the end of World War II, the One Great Hour of Sharing offering brought relief to neighbors in need within the United States for the first time. In the 1960s, it expanded to include international needs.

Now, more than 70 years later, OGHS continues to address pressing human needs in the U.S. and around the world through the ministries of Presbyterian Disaster Assistance, the Presbyterian Hunger Program and Self-Development of People. Gifts made through OGHS provide relief for communities after natural or human-caused disasters, sustainable food sources for people experiencing hunger, and empowerment for people who are economically poor, oppressed or disadvantaged.

The 2020 OGHS theme, “You shall be called repairers of the breach,” is taken from Isaiah 58:12. Whether it’s a pot of savory soup to feed hungry souls, a flower placed on a cross for a $5 donation or fishbowls stuffed with coins donated by Sunday school classes — all these creative efforts contribute to God’s work through Presbyterian Mission.

Community enjoys weekly soup suppers
In the Presbytery of Nevada, Shirley Garrett, 85, has been baking homemade bread for the Soup Supper at Wells Presbyterian Church for 15 years. The weekly Wednesday evening meal is held during Lent as a fundraiser for OGHS.

Mike Seech, Jackie Stanhope and Elaine Swanson, who’s the church’s secretary, have cooked up many, many gallons of soup over the years, with Seech and Swanson making meat-based soups and Stanhope preparing the vegetarian soups. Others make salads and desserts. The meal is open to anyone in the community and attended by an average of 18 people each week. People pay or donate any amount they determine, and the church matches the total raised for the OGHS offering.

With matching funds from the church, Wells Presbyterian Church is able to donate an average of $2,000 to the OGHS offering, which represents about 10% of the church’s annual budget, Swanson said.

The Soup Supper began as an outreach to help people experiencing homelessness in the community. It continues today to serve individuals and communities in need all around the world.

Congregants and visitors flower the cross
The Rev. Jim McCrea accepted the call to First Presbyterian Church of Galena, Illinois, in Blackhawk Presbytery, nearly three decades ago (April 1992). He brought with him a creative idea from his father’s church in Waterloo, Iowa.

The late Fred Huston, a member of FPC Galena at the time, crafted a large wooden cross and pierced it with 80 holes. The cross stands at the front of the sanctuary and is a source of conversation for visitors. Between Ash Wednesday and Easter Sunday, the cross is visibly transformed as congregants and visitors donate to One Great Hour of Sharing. Every $5 given adds another colorful, nonperishable flower in one of the holes.

“The cross always starts out bare,” McCrea said, “yet by Easter it is overflowing with flowers.”

In 2018, the congregation of about 60 people raised $824 for OGHS, according to McCrea. OGHS is just one of the special offerings supported by FPC Galena. In the summer, the congregation has a four-week collection for Presbyterian Giving Catalog projects.

For example, McCrea said, “People campaign for ‘cows’ or ‘pigs’ or ‘bees’ during the four weeks. Then we vote to select the top two or three projects [from the Presbyterian Giving Catalog] to fund.”

FPC Galena welcomes everyone. Its website says, “We extend a special welcome to those who are single, married, divorced, straight, gay, confused, well-heeled or down-at-heel. We especially welcome wailing babies and excited toddlers. We welcome you whether you can sing like Pavarotti or just growl quietly to yourself.”

The church was planted in 1829 by the Rev. Aratus Kent, a graduate of Princeton and Yale universities, who left his parish in New York City to bring the gospel to what was then considered the western frontier. Kent wrote to the American Board of Home Missions, asking to be sent to “a place so tough no one else will take it.” They assigned him to Galena.

Sunday school classes ‘Feed the Fish’
The mission statement of First Presbyterian Church of Salisbury, North Carolina, founded in 1821 in Salem Presbytery, is “God’s Love Alive for Mission.” FPC Salisbury has a vision to be a community of faith that thinks with the mind of Christ, loves with the heart of Christ, and serves with the hand of Christ.

Each year during Lent, all Sunday school classes at FPC Salisbury fill plastic fishbowls with donations for One Great Hour of Sharing. The annual Feed the Fish fundraiser has become a successful and enjoyable project, said Elizabeth Snelbaker, director of Christian education. Over the years, the lighthearted competition has helped the church’s OGHS offering to grow from hundreds of dollars to thousands. A formula is used to change checks and dollars into nickels, and bulletin boards keep track of which class is in the lead.

Of the dozen children and adult Sunday school classes competing, Snelbaker thinks the Everyman’s Bible Class, for all men of the church, holds the record for hauling in the biggest catch every year since the competition began in 2007 at FPC Salisbury, located in a spot that almost guarantees a successful catch — 308 Fisher Street.

The big reveal always takes place on Easter Sunday with a butterfly release and a flowering of the cross in the courtyard. Each year, congregants bring fresh flowers from their yard or the grocery store for the cross decorating.

“While we play up the competition between Sunday school classes,” Snelbaker said, “the true winners are those who benefit from this very special offering.”

This was originally published for Presbyterian News Service on March 20, 2020.