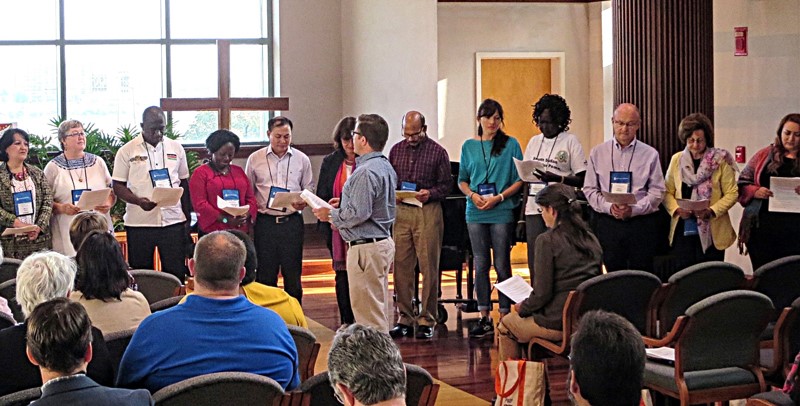 Catch up with 16 International Peacemakers in virtual symposium

The first-ever International Peacemaker Virtual Symposium will provide a rare opportunity to hear from 16 outstanding individuals who had transformative experiences while being hosted in the United States by the Presbyterian Church (U.S.A.).

The former International Peacemakers will share their stories and perspectives during the symposium, which consists of 13 videos that will be rolled out one at a time on Facebook, starting Monday and continuing through Oct. 10. However, anyone who would like to peruse all the videos can do so via the symposium’s webpage anytime.

“The first one is Lydia Neshangwe and she is from Zimbabwe and she is the new moderator of the Council of World Mission. She is remarkable,” said the Rev. Carl Horton, coordinator of the Presbyterian Peacemaking Program.

Neshangwe will be followed by a Palestinian panel and a host of others, addressing a variety of topics, such as their lives and work, the impact of COVID-19 in their countries, racial injustice in the United States and memories of being Peacemakers.

“Almost all of them suggested that being an International Peacemaker was transformative for them,” said Horton, who conducted the interviews. “They returned home with a greater appreciation for the universal church, for the global church, for our partnerships and the worldwide communion of Christians.”

Normally, International Peacemakers travel to the United States, where they take part in an orientation at the Presbyterian Center in Louisville and then visit four or five mid councils around the country. But that’s not possible this year because of the global COVID-19 pandemic.

Though born out of necessity, the 2020 approach does present an advantage. Because they’re on video, “you can visit with 16 Peacemakers this year instead of just one,” Horton said.

The symposium participants include: Jaff Bamenjo, coordinator of RELUFA, the Network for the Fight Against Hunger in Cameroon; Deon Snyman, managing director of the Goedgedacht Trust, a well-established nonprofit organization in South Africa advocating for thriving rural communities; Tamar Wasoian, an Armenian educator and theologian who’s a descendent of Armenian Genocide survivors; and Delia Leal, regional coordinator for the Women’s Ministry of the Protestant Center for Pastoral Studies in Central America, which works to prevent and eradicate violence against women.

Recording videos of Peacemakers, who participated as far back as 2012 and as recently as last year, provided “a chance to catch up,” Horton said. “It was also a chance to reminisce. There are Peacemakers who made very profound friendships. Most of them talked about the incredible hospitality of the Presbyterian Church and the hosts. It’s really, really wonderful to hear from them.”

Many of the alums hail from countries in which whites are not the majority, so it was interesting, Horton said, to hear the Peacemakers’ perspectives on the Black Lives Matter Movement in the United States and how it has trickled into their countries.

“I think it will be helpful, I hope, for Presbyterians to hear a global perspective of … a year of racial reckoning,” he said.

The symposium is occurring during the Season of Peace, a four-week pilgrimage that’s designed to deepen the pursuit of peace for congregations, small groups, families and individuals.

The Season concludes with World Communion Sunday, Oct. 4, which is also the day of the Peace & Global Witness Offering.

“The Peace & Global Witness Offering draws Presbyterians together to learn with active peacemakers all over the world,” said Bryce Wiebe, director of Special Offerings. “The International Peacemaker Symposium is a perfect example of the power of a connectional system which seeks partnership, common cause, and shared witness in pursuit of our call to share the peace of Christ. We are grateful for the participation of Presbyterian congregations in this Offering, 25% of which is retained for use in pursuit of Christ’s peace in their context.”

The International Peacemakers program is expected to resume next year from Sept. 24-Oct. 18. Meet the class of 2021 here.

Give to the Peace & Global Witness Offering to continue the valuable ministry of these International Peacemakers visits.

This was originally published for Presbyterian News Service on September 25, 2020.