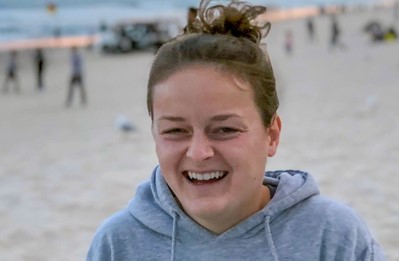 It’s truly a ‘virtual world’ when someone born and raised in South Carolina can work full-time in Portland, Maine, while also serving as a virtual Young Adult Volunteer fellow with the Presbyterian Church (U.S.A.) in Louisville, Kentucky.

Grace Smith is currently serving as a YAV fellow in the Presbyterian Mission Agency’s Office of Christian Formation, where she has been creating new resources for use across the denomination.

Smith is a graduate of Duke University, where she earned a Bachelor of Science in neuroscience with double minors in psychology and religion. During her short-term fellowship, Smith has used her passion for mental wellness and communal healing to compile a toolkit of supportive resources for grieving children and their caregivers. She created the toolkit “virtually” in April and May, while continuing her AmeriCorps work with refugee/asylee students at the Center for Grieving Children in Portland, Maine.

Smith described her AmeriCorps volunteer work in the Intercultural Peer Support Program of the Center for Grieving Children as giving children of refugees/asylees — fourth through eighth graders — permission to have fun. “We just work to create spaces where the students can feel free to speak in whatever language they want, to sort of unite with each other on this common journey, whether that be just playing with puppets or playing games, having fun.” This year many of the children are from Angola, the Democratic Republic of Congo and the Middle East, she said.

As a graduating senior, Smith received the Algernon Sydney Sullivan Award in 2020, presented by the Sullivan Foundation, a Duke University partner. The award is given annually to one faculty member and one member of the student body for their outstanding commitment of service to others. She was nominated for the award by the Rev. Libby Boehne Sapp, who leads the Presbyterian Campus Ministry at Duke, part of UKIRK Collegiate Ministries. In her nomination of Smith for the award, Sapp said, “It is rare to find a person who deeply cares for other people by asking questions, actively listening and being with others in their most difficult times. Grace is that person.”

Smith attributes her passion for helping others, particular people experiencing trauma, to being the kid of a Presbyterian pastor and a social worker. “It’s sort of an amazing blessing to be raised by people who just practice presence as their occupation,” Smith said, “and who are present with people in times when much of the world isn’t.”

She thinks her first exposure to the field of trauma work was a high school research project in which she learned about post-traumatic stress through conversations with veterans back home in South Carolina.

Smith’s brother and sister are both graduating from seminary in the next week or so, and her sister also served as a YAV in Scotland in 2016–17. Though Smith initially applied for in-person YAV service, which fell through due to the COVID-19 pandemic, she was just as excited to learn she could serve virtually.

The Supporting Grieving Children series, created by Smith during her time as a YAV fellow, is the first series of resources to use all three of the Christian Formation templates — Compass Points, QuickSheets and Resource Roadmap:

“Grace is an intelligent and thoughtful young woman. It has been a joy to have her on our small team,” said Stephanie Fritz, mission coordinator for Christian Formation. “Her contributions in this short time will be lasting. She is a good reminder of how we need to open up more leadership for young adults in our denominational structure.”

Three years ago, Smith served as a summer intern with Solace Ministries, a nonprofit grassroots organization bringing hope to survivors of genocide in Rwanda. She was inspired by the resilience and spirituality of genocide survivors who were able to reach out with hope and faith, creating spaces for joy and sadness, anger and disappointment, doubt and confidence.

“When I learned we had an opportunity to have a YAV fellow, I was so excited, “ said Miatta Wilson, mission specialist in the Office of Christian Formation, who also served as a YAV in Newport, Oregon, and in Cameroon in 1989 and 1990, respectively.  After learning about Smith’s work with grieving children, it seemed like an ideal fit for Smith to write about children and grief, Wilson said, adding, “From the get-go, we could tell Grace was passionate about supporting children who have experienced trauma and grief. She had her drafts completed in a matter of days and blew us away.”

“Grace has been eager to learn about our partner organizations and their work, as she expands her knowledge of the greater church and work of the PMA,” Wilson said. “She has a quiet, observing, reflective nature. Selfishly, I wish she would be a fellow in our office longer. I can’t wait to see where God leads her next to share her gifts with God’s people.”

Smith plans to begin graduate school in the fall, studying more about the intersections of health, medicine and society — where culture can provide community and healing.

In its 30-year history, the Young Adult Volunteer program has produced future pastors, ruling elders, educators and leaders of nonprofit organizations. But in this special virtual year some, like Smith, are getting the opportunity to learn in-depth about the Presbyterian Mission Agency and its ministries.

This was published for Presbyterian News Service on May 10, 2021.