They gather to remember.

Every year on or close to July 16 — a day that will never be forgotten by the Navajo people — hundreds of Diné families and numerous allies from the Red Water Pond Road Community Association come together on Navajo Nation near Church Rock, New Mexico, to mourn, to pray, to heal and to act.

There, not far from the site of the 1979 Uranium Tailings Spill, the largest release of radioactive material in U.S. history, Navajo tribal members lift their voices annually on Uranium Legacy Action and Remembrance Day — except in 2020, when the commemoration was canceled at the height of the pandemic. They seek healing from decades of environmental injustice to renew their resolve that such a grievous breach will never happen again.

Over 40 years ago when an earthen dam on United Nuclear Corporation’s tailings disposal pond in Church Rock ruptured, 1,000 tons of solid, radioactive mill waste and 90 million gallons of acidic and radioactive liquids poured into the Rio Puerco. The resulting contamination of the land, air and ground water immediately affected nine Navajo municipalities, known as Chapters, as well as Gallup, New Mexico, and communities as far away as Arizona.

Year after year, the Diné people gather to share their testimonies, punctuated by their tears and their pain.

Because the toxic and cumulative effects of this human-caused and preventable disaster have impacted the Navajo people for generations — especially in the form of such chronic health problems as asthma as well as a higher incidence of miscarriages, birth defects, and liver and pancreatic cancer — the people necessarily mobilized for action in grassroots groups.

The five core groups of the Multicultural Alliance for a Safe Environment partner with the Presbyterian Church (U.S.A.) through its Committee on the Self-Development of People program. (Photo by Scott Kovac)

The Red Water Pond Road Community Association (RWPRCA) — one such organization composed of Diné families directly impacted by uranium mining and milling — is one of five core groups that make up MASE, the Multicultural Alliance for a Safe Environment, which partners with the Presbyterian Church (U.S.A.) through its Presbyterian Committee on the Self-Development of People (SDOP).

The Rev. Dr. Alonzo Johnson, SDOP’s coordinator, said that MASE’s work embodies the principles of SDOP, particularly its connection with advocacy, in that it effectively networks and equips the people who are directly impacted by environmental racism as they seek to influence and change the structures that perpetuate poverty, oppression and injustice.

“Whenever we talk about community power, especially in relationship to the issues facing Native communities, MASE is an incredible attestation to the power of community organizing,” said Johnson. “MASE is influential, inspiring and a good model of living out SDOP’s call to advocacy. And although this is not a congregation, what congregations can learn from a group like MASE is that congregational organizing is important, especially when they’re facing environmental issues.”

Gifts to One Great Hour of Sharing are helping MASE in its vital and singular mission “to restore and protect the natural and cultural environment through respectfully promoting intercultural engagement among communities and institutions for the benefit of all life and future generations.”

For Ruling Elder June L. Lorenzo, Laguna Pueblo/Navajo (Diné), her own engagement in MASE’s work deeply informs her service on various national bodies of the PC(USA), especially the Native American Advisory Committee, which focuses on the implementation of the General Assembly’s repudiation of the Doctrine of Discovery. Lorenzo is a member and clerk of session at Laguna United Presbyterian Church, the only Native American congregation in the Presbytery of Santa Fe.

The Doctrine of Discovery, which originated as a papal teaching, was used by European countries and later by the U.S. in its westward expansion to justify the colonization of other parts of the world. Large numbers of Native Americans in the U.S. lost their land, and their lives, as a result.

“Our having repudiated the Doctrine of Discovery will help the PC(USA) address the harm of past injustices and inform the denomination in its future mission work,” said Lorenzo, a human rights attorney who regularly advocates for the rights of Indigenous peoples before the United Nations and the Organization of American States. Lorenzo, whose home community is the site of a former uranium mine, now a Superfund site, is also a member of the Laguna-Acoma Coalition for a Safe Environment, another of MASE’s five core groups.

“It’s an important part of the PC(USA)’s work that we understand how we have been complicit in the doctrine’s implementation,” said Lorenzo. “Our partnership with MASE in working toward environmental justice and preventing irresponsible mining is related to our commitment to the protection of sacred sites, since a lot of land is connected to the Doctrine of Discovery.”

Lorenzo works closely with MASE’s coordinator, Susan Gordon, who herself has more than two decades of grassroots organizing experience with impacted community groups at the local, national and international levels.

“What’s important in this work is the relationships — on the ground, in community, in grassroots groups,” said Gordon. “That’s where you see change happening and that’s where the leadership has to emerge if we truly want to change things.”

Because Gordon, who started her career as a grassroots organizer in Oregon, understands and deeply values MASE’s “bottom-up” structure, she was quick to clarify her role with the organization.

“I am not the decision maker for the network, and I don’t direct what they do,” she said. “As a white person, I understand that I have been in a position of privilege, but I have always advocated for the underdog.” 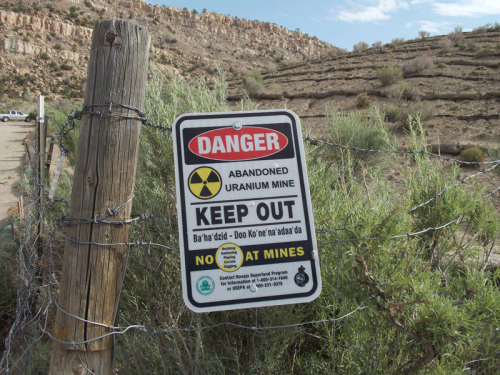 The Eastern Navajo Diné Against Uranium Mining is another of MASE’s core groups. (Photo by Scott Kovac)

Gordon explained that one of the earliest grassroots organizations to be formed on Navajo Nation was the Eastern Navajo Diné Against Uranium Mining, another of MASE’s five core groups.

Gordon said that the generous grant MASE received through One Great Hour of Sharing allowed the small nonprofit to allocate money from its limited budget directly to each of its core groups to help them do their work. MASE supports their meetings by providing food and funding for travel, where needed, as well as offering training in organizational development, fundraising and public speaking.

“From the time I first started with them over the course of these seven or eight years, I have seen them grow more confident in their ability to speak in public,” Gordon said of the RWPRCA members who plan, organize and hold the gathering. “It used to be that just one or two people would speak, and now they instinctively take turns and share their stories, which are very personal.”

Beyond offering a way to voice the nation’s intergenerational trauma, the commemoration also serves as an opportunity to educate and expose Navajo youth to the realities of environmental racism.

At the last in-person gathering, the organizers were successful in getting the young people more engaged by inviting them to do the set-up and distribute the food. They also charged the youth to carry on with the struggle, since the issue of uranium contamination will not be resolved in the current leaders’ lifetime. 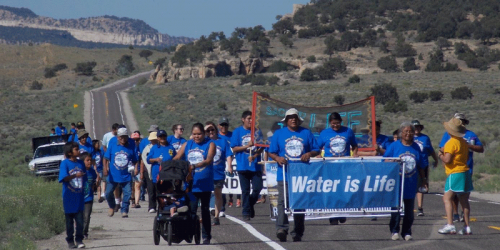 When remembering the the rupture of an earthen dam that occurred more than 40 years ago, an environmental disaster that affected nine Navajo communities, organizers are quick to engage the help of young people. (Photo courtesy of the Multicultural Alliance for a Safe Environment)

“We were asking the young people what they know about uranium,” Gordon recalled. “Most of them said they knew that it’s poison, although some knew a little more. One young man, after he had introduced himself, said directly to me, ‘Susan, what can I do?’ I felt that was a breakthrough moment for him to recognize that he has a responsibility.”

For both Gordon and Lorenzo, the call to engage young people is clear, compelling and necessary.

“At the end of the day, this is not short-term work,” said Gordon. “This is decades. And generations.”

As for Lorenzo, she further appreciates that MASE’s mission is congruent with the Presbyterian Mission Agency’s Matthew 25 invitation, which, like MASE, is similarly dedicated to addressing the systems and structures that perpetuate oppression, leading to poverty.

“I don’t know how much more Matthew 25 our partnership with MASE could be, working to repair the breach from the Doctrine of Discovery,” Lorenzo said.

Because Lorenzo is also a member of a “Four for Four” congregation — Laguna United was recognized with a certificate for receiving all four of the PC(USA)’s Special Offerings — she is grateful that gifts to One Great Hour of Sharing from churches such as hers benefit MASE.

Johnson said that when people give to One Great Hour of Sharing, they become “the arms of the church,” helping communities to find their voice and access their God-given power.

“I know that people who give money will feel good about knowing that their gifts are going for important work,” added Gordon, “and I see what that important work looks like on the ground. The [offering’s] support is essential for these communities to keep going.”

One Great Hour of Sharing benefits the ministries of the Presbyterian Hunger Program, Presbyterian Committee on the Self-Development of People and Presbyterian Disaster Assistance. Most congregations receive the offering on Palm Sunday or Easter Sunday.